A South African at Burning Man 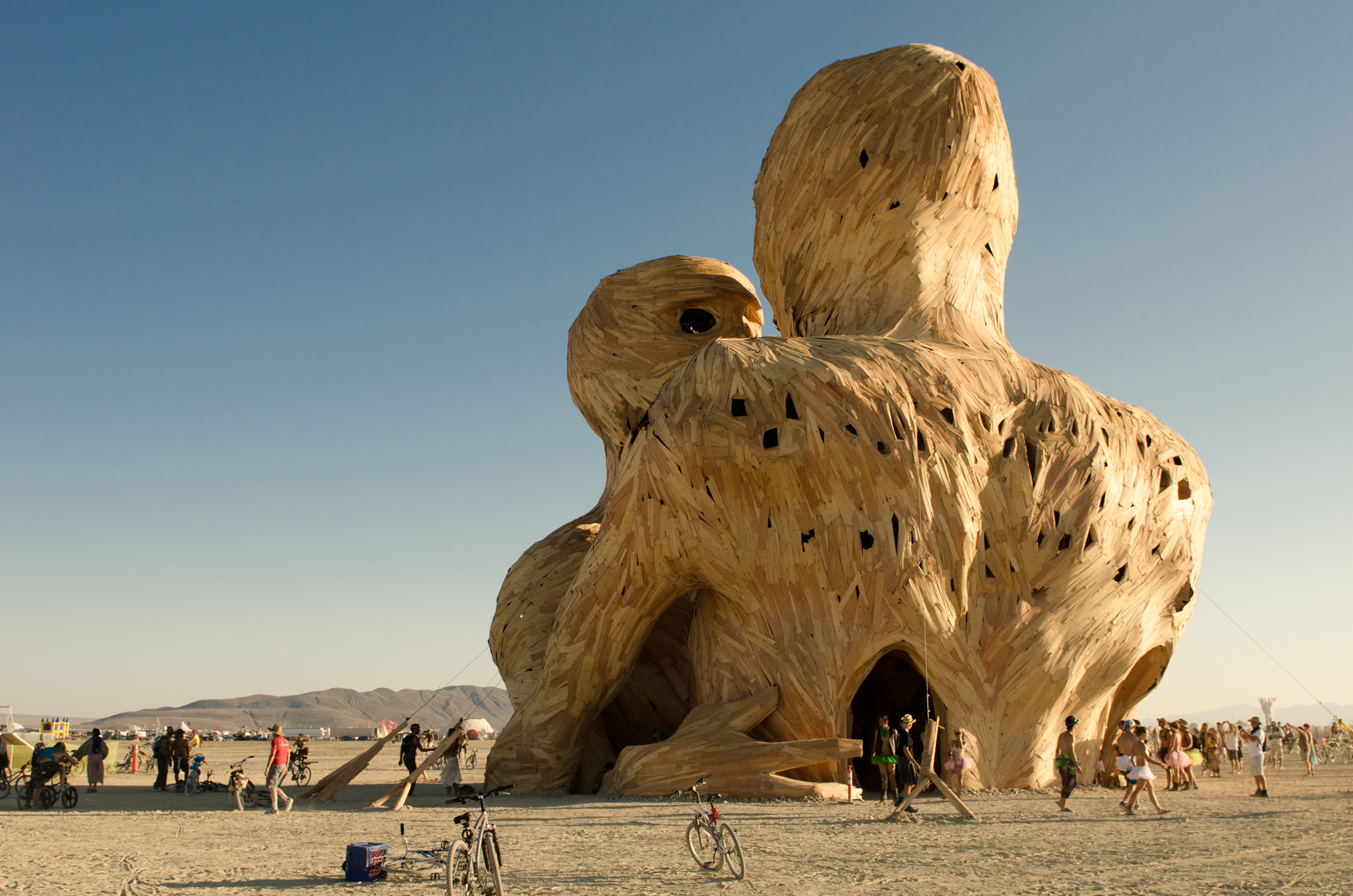 Sunset in the Black Rock Desert. The blinding white light that’s been beating on the cracked, dusty earth all day has finally abated, and the sky behind dusky mountains is swathed in bands of pink, apricot and purple. A golden dragon picks up passengers and glides past a huge structure of a couple embracing, with arms poking out of their eyes; a huge super yacht on wheels blasts dance music as a life-size panda car containing a couple and a family of stuffed pandas drives by. A man in gold on an electric skateboard takes off in a flurry of dust. A dreadlocked woman sits in lotus meditating, eyes closed, calm as a zen monk. There are multiple weddings taking place in front of a temple so beautiful and delicate it looks like it shouldn’t be standing. The wooden effigy of a man several storeys high looms over a scene of a sword battle. In the distance, a crackle of fireworks explodes over a gigantic sculpture. As the sun dips behind the mountain backdrop, a chorus of howling explodes across miles of this temporary city. The first LED lights come to life: suddenly there are flashing colours everywhere you look, heralding another night where this isolated desert location turns into a surreal glow-in-the-dark world of lights, colours, music and jets of flames.

It was day one –  my first time at Burning Man – and I’d already run out of words to describe my endless feelings of amazement, gratitude and incredulity at the wonder and generosity of Black Rock City and its 68 000 inhabitants. I thought I’d known what to expect – I’ve gone to AfrikaBurn (the South African regional offshoot) three times and read everything I could about Burning Man before driving out to Nevada, but it turned out that the reality of this place far surpassed any ideas I’d had.

Burning Man feels like a real city – a fully-functioning alternative to the “default” world – a parallel universe inhabited by a community that’s fully committed to a culture that’s nearly three decades old. A friend put it well when he said that people at Burning Man are there to do things for others, and not just for themselves. The amount of gifting happening is just astounding – as was the scale and range of theme camps, art works, installations and performances. When you drive in the city gates, you’re handed a thick programme book listing just about anything quirky, fun and educational you can think of. There are meditation, traditional African dance, hula hooping, pole dancing and permaculture workshops, classes in qi gong, how to be a super hero, parkour and improv comedy, fiction writing contests and food offerings (everything from ice cream and snow cones to miso soup and fresh smoothies), massage and beard grooming services, photo studios and clothing boutiques and parties ranging from an old school UK rave to a Pussy Riot tutu bash. I highlighted everything I wanted to do and didn’t pick up my book again.

Instead I got on my bike, cycled in a random direction, and went on unplanned journeys of discovery. Every day was made up of a series of unpredictable highlights. I did a yoga class at sunset in front of a giant hi-fi art car, danced like crazy to Major Lazer and Skrillex and saw an amazingly mellow set from Tycho at 3am, listened to a neuroscientist, clinical psychologist and professor of Buddhism give fascinating talks at a TEDx conference, had a silent tea ceremony, stayed up for sunrise and watched skydivers streak through the sky and the burning of Embrace, downed fireball whiskies and danced on top of a Celtic castle, ate Cuban grilled cheese sandwiches and vodka-watermelon at a tutu party, did ten pin bowling, drank ice-cold sake and the best dirty martini I’ve ever had (thank you Australian barman from Camp Anita), rode around for hours on the saddle of a snail, explored the Deep Playa, rollerskated around a roller disco rink and – letting go of my South African conservatism around nudity – showered naked with 80 strangers under high-powered mint-infused foam jets while dancing to Daft Punk (my number one highlight – an intensely liberating experience I’ll remember forever). I didn’t stop missioning the whole time I was there and I still probably only saw a tiny percentage of Black Rock City’s wonders.

My favourite thing about Burning Man, however, was the people. Anyone who knows me knows that I absolutely love talking to strangers – it ranks with travel as one of my favourite things in life. At Burning Man there’s an ingrained practice of stranger hugging and talking: if you stand in one spot for longer than a minute, someone will come up to you, give you a hug, and start a conversation. I met people from all over the world: Utah to the Ukraine, Puerto Rico to the Philippines, Ireland to Israel and talked about art, music, travel, cognitive science and psychology, positive and negative atheism, South African politics, Stanley Kubrick, the Argentinian economy, The Big Lebowski and the Meaning of Life. I talked a lot about how much I loved Burning Man and how much fun I was having. Some of these meetings lasted a few minutes, and some a few hours – all were fleeting connections with warm, engaged, interesting people that I would love to be friends with back in the “default” world.

A lot of people at Burning Man and friends back home in South Africa wanted to know the difference between Burning Man and AfrikaBurn. The answer is – a lot. The size of Burning Man – 70 000 people compared to AfrikaBurn’s 9000 – means that there’s more on offer in terms of everything, including things like Wi-Fi (some theme camps offer it as their gift), services (like bike rentals) and turn-key or plug-in-and-play camps (fully catered camps where meals are cooked for you and everything else you need is set up when you arrive). In comparison AfrikaBurn is much more low key – hardly anyone comes in RVs, there are no luxury camp options and a lot of things feel more homemade. There’s been a long time in which the culture of Burning Man has grown organically to get to where it is now – AfrikaBurn, which started only eight years ago, is still building its own culture based on the Burning Man principles. After the mind blowing experience of Burning Man, I still love AfrikaBurn – I love the fact that it’s so intimate compared with the scale of Burning Man, and I love its distinct African edge and South African sense of humour. It’s still developing year by year and it will be interesting to see if it ends up like Burning Man or if it follows a slightly different path.

I met so many South Africans at Burning Man who’d travelled a long way just to attend the event, and each year at AfrikaBurn I meet more Americans and other international participants who make the journey out to the Tankwa Karoo to experience the largest regional burns event in the world. Both Burning Man and AfrikaBurn offer a taste of something that’s hard to put into words – a chance to rediscover the same magical perspective we had on the world when we were children before cynicism, socialisation, pragmatism and life experiences made us more immune to wonder, a chance to be part of a community that works hard to uphold important beliefs that have nothing to do with money or status, a chance to release ideas you have about yourself and how you’re supposed to be and a chance to let go, dress up and dance till sunrise. 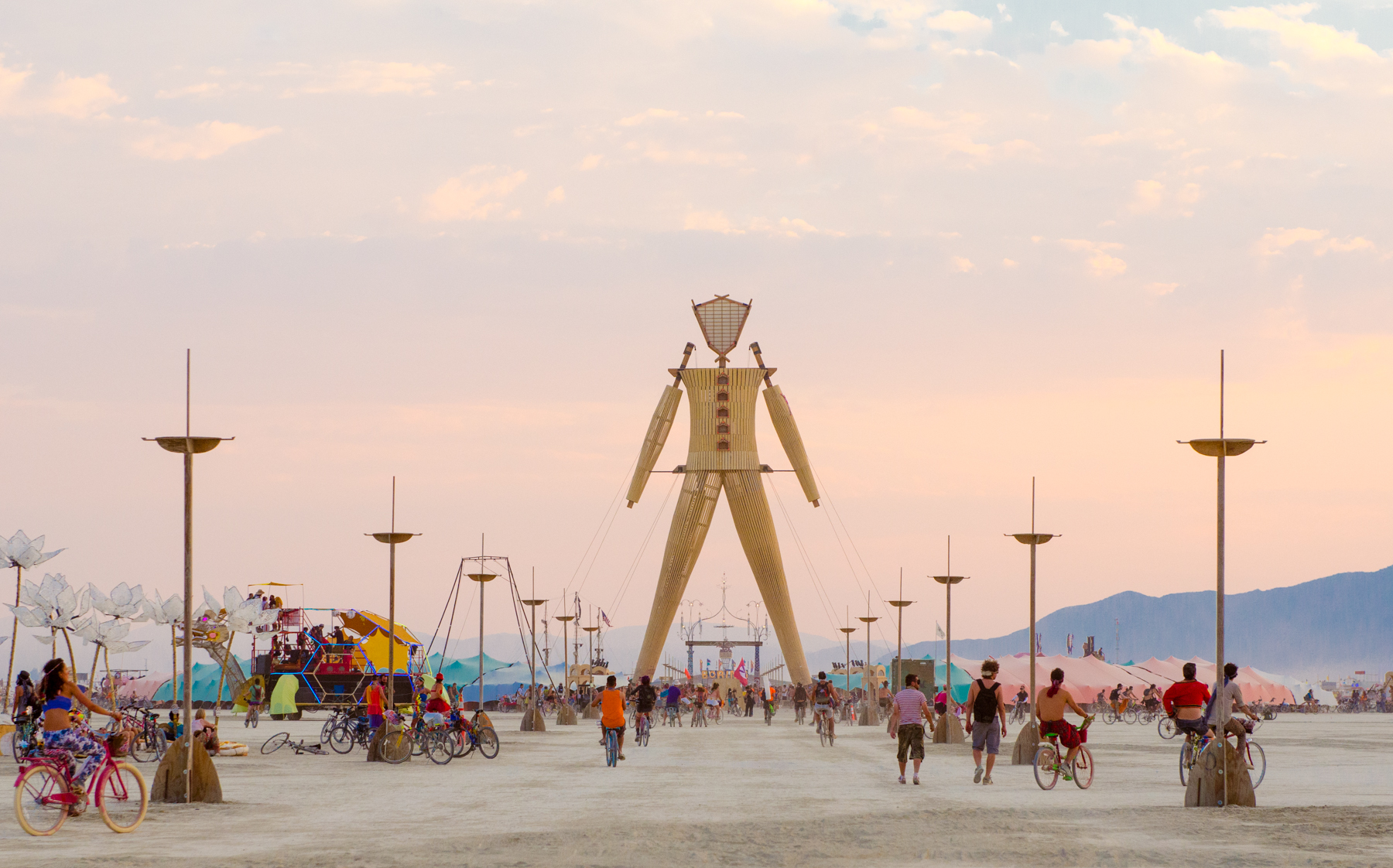 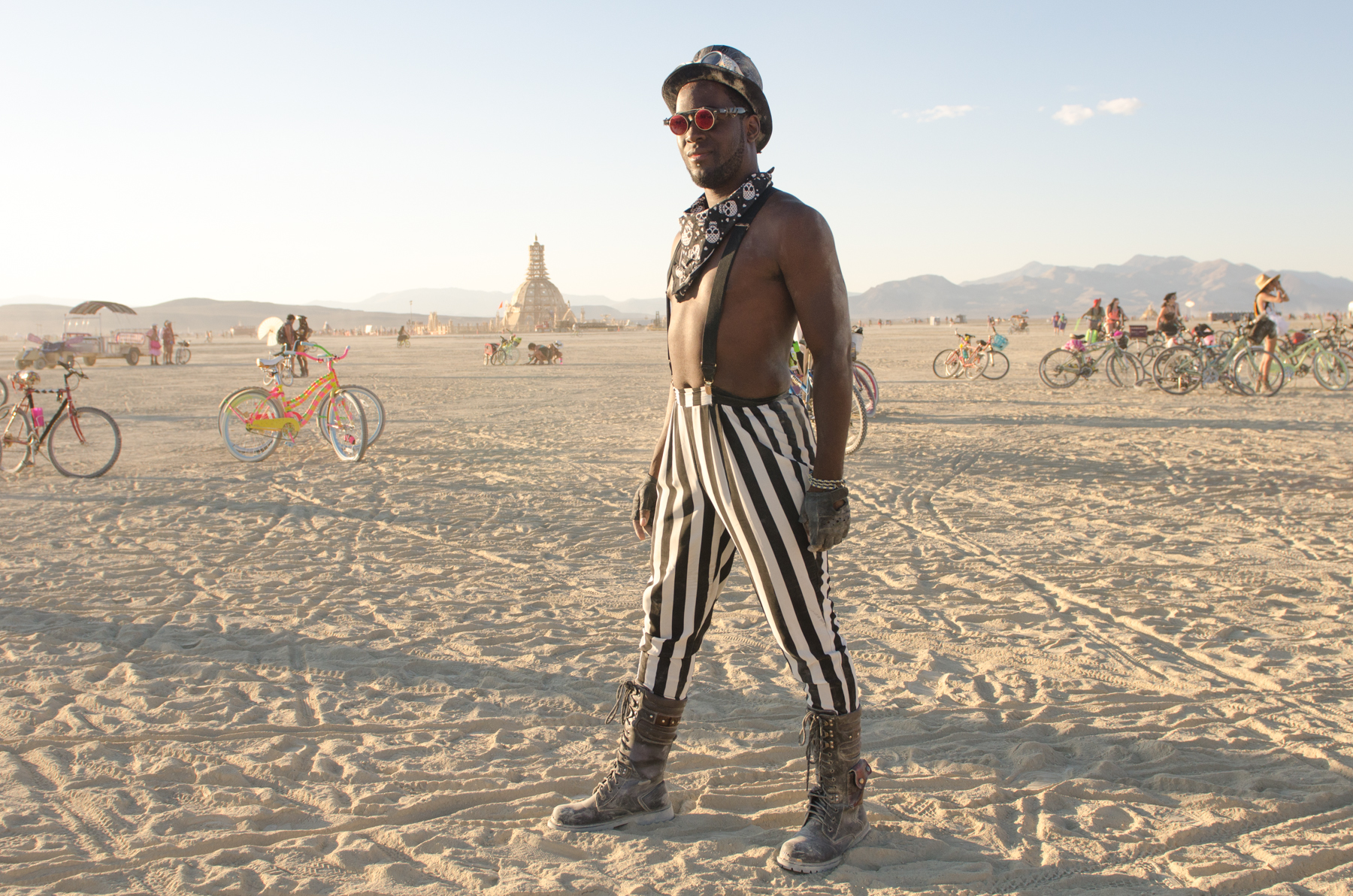 If I’d had more time I would have loved to do a “Humans of Burning Man” series and interviewed every interesting-looking person I came across (which was thousands of people). 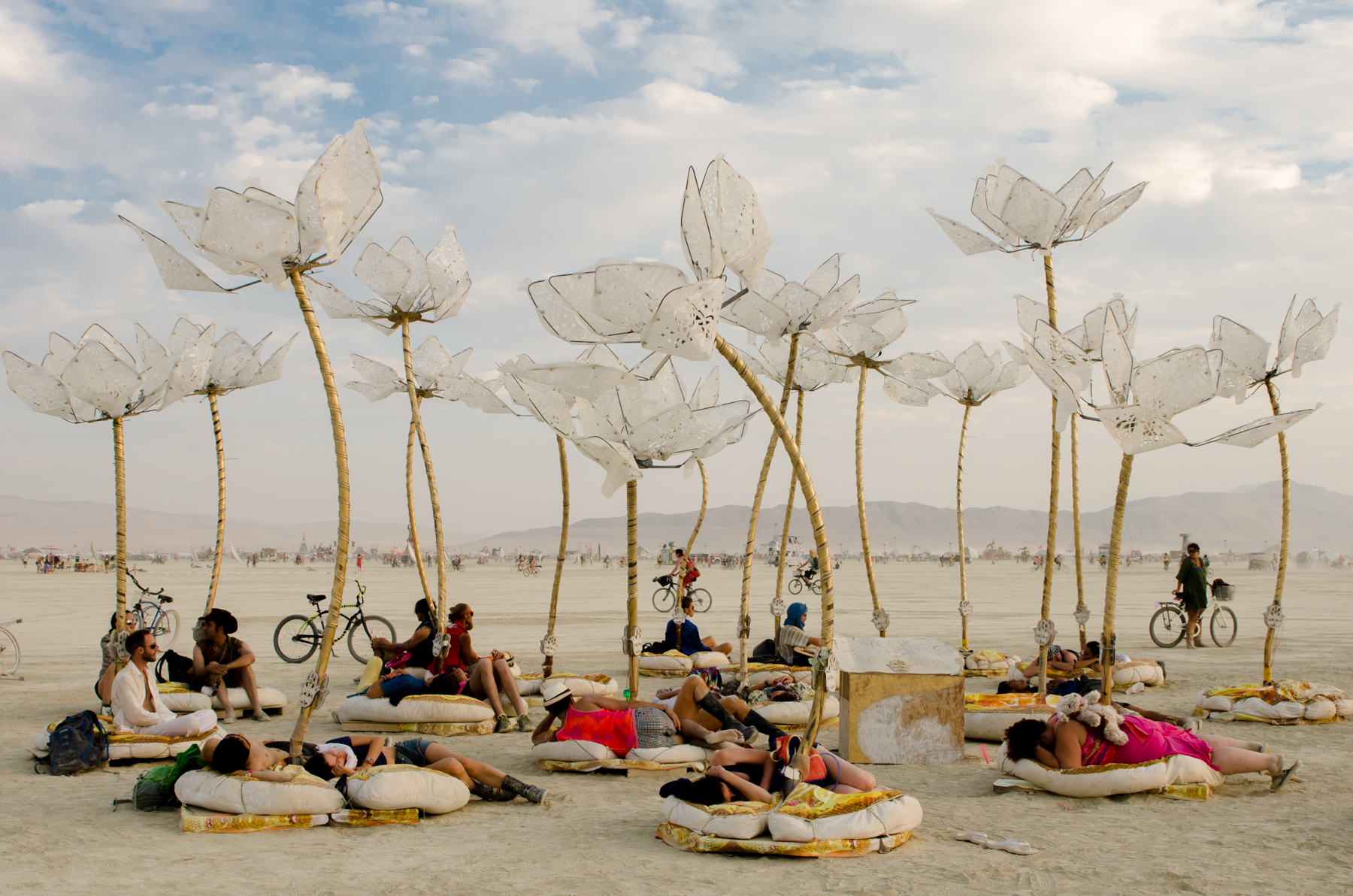 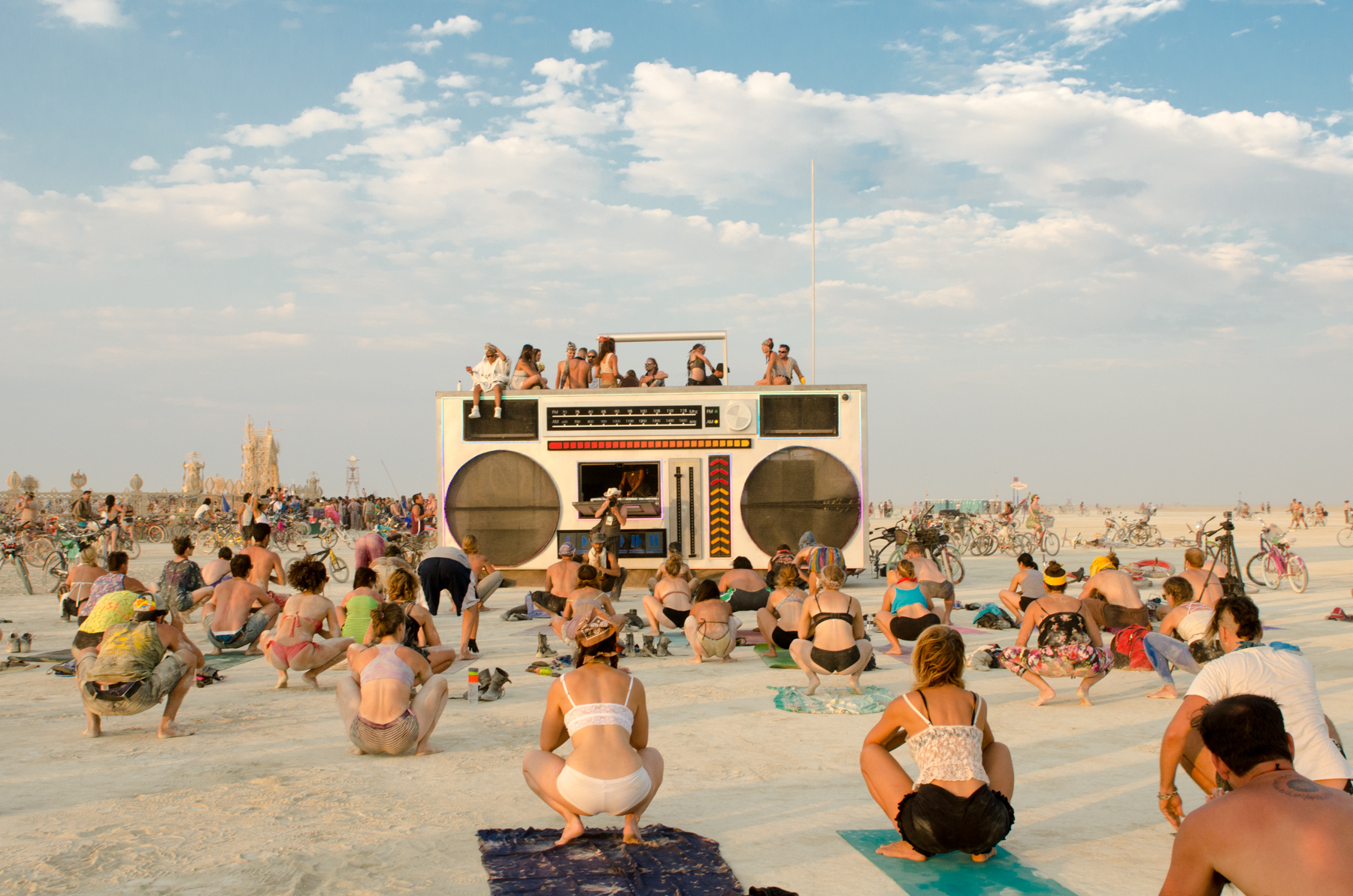 One of my most memorable yoga classes ever. 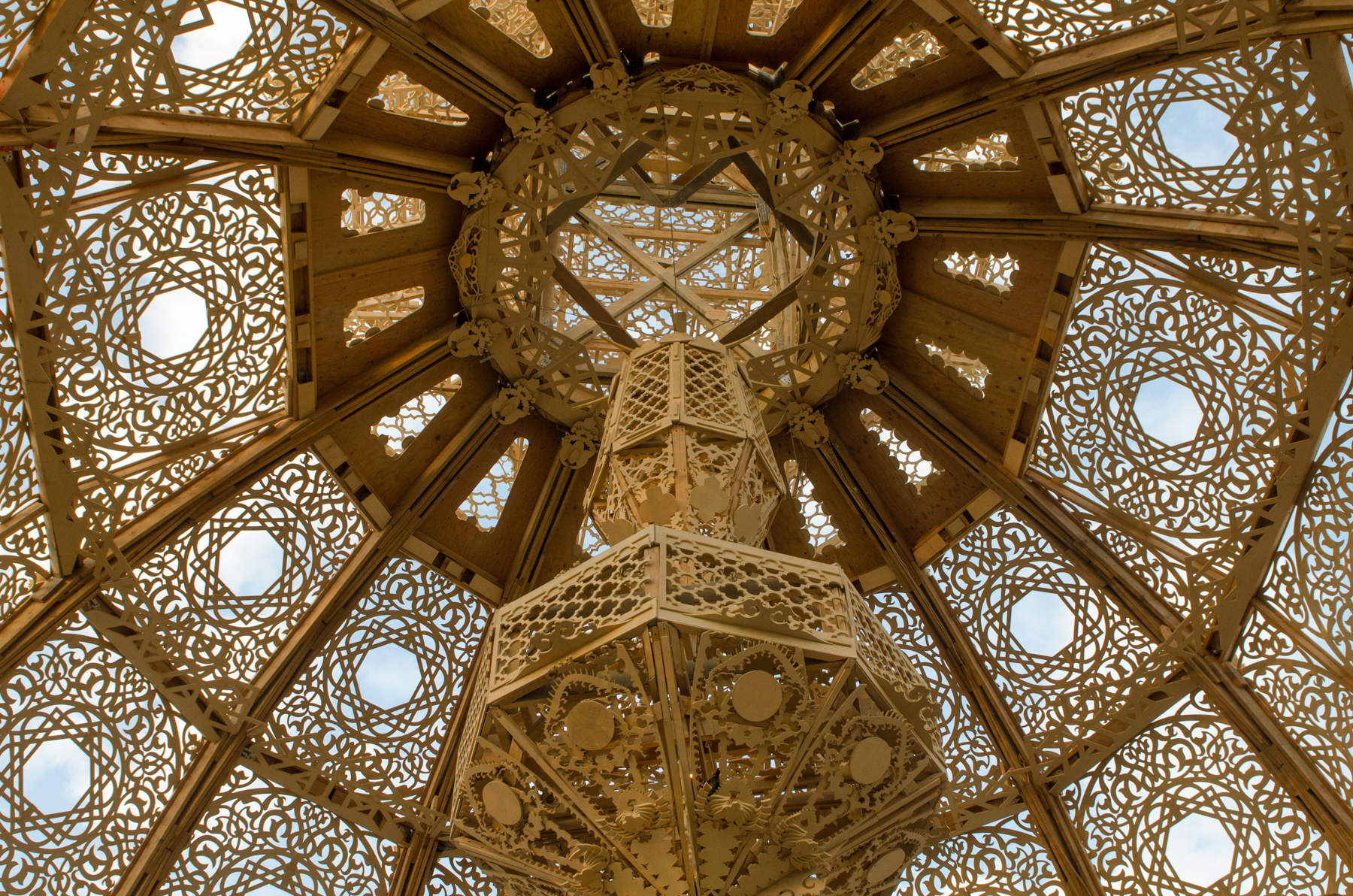 Inside the beautifully intricate Temple of Grace – – a very emotional place, where people leave photos and notes for loved ones who’ve died. No matter what kind of party is going on outside, inside here people are respectfully silent. 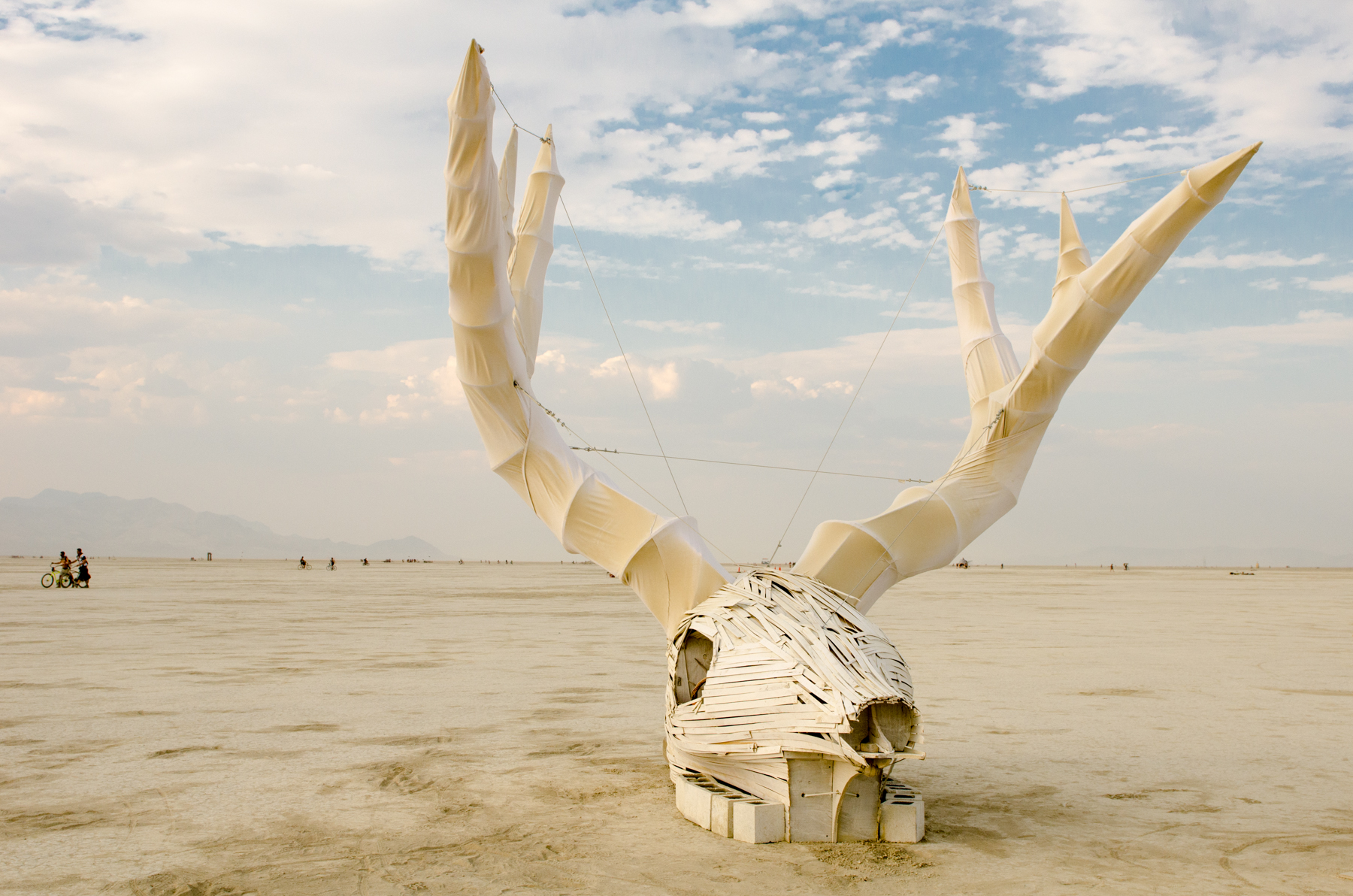 The Skull of Actaeon: inspired by a Greek myth about a Actaeon, huntsman turned in to a stag by a goddess and torn to pieces by his hounds. At night, you could place your hand in a mould to make the skull light up and see yourself as Actaeon. 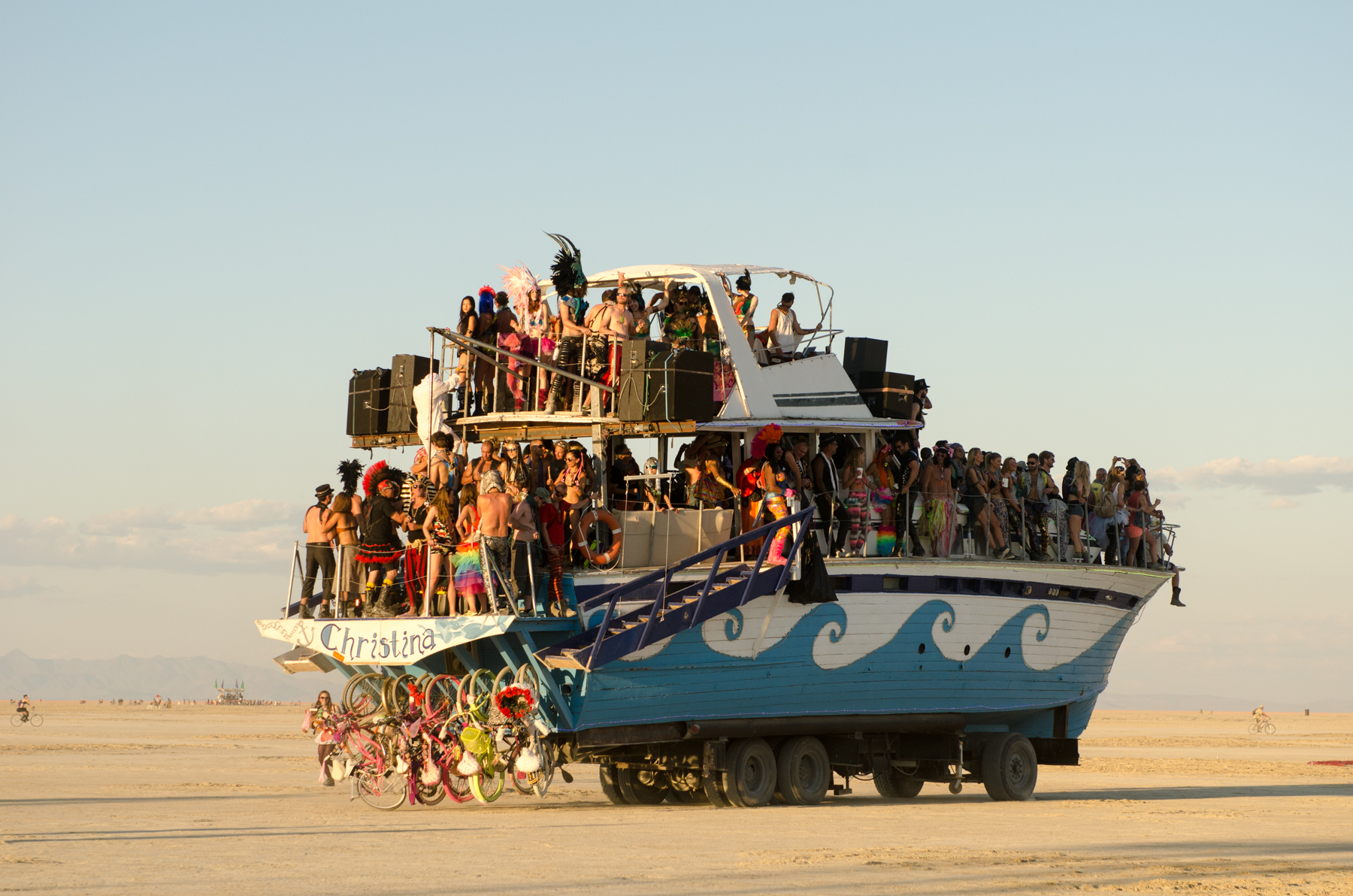 One of the many astoundingly awesome art cars that criss cross the Playa all day and all night. 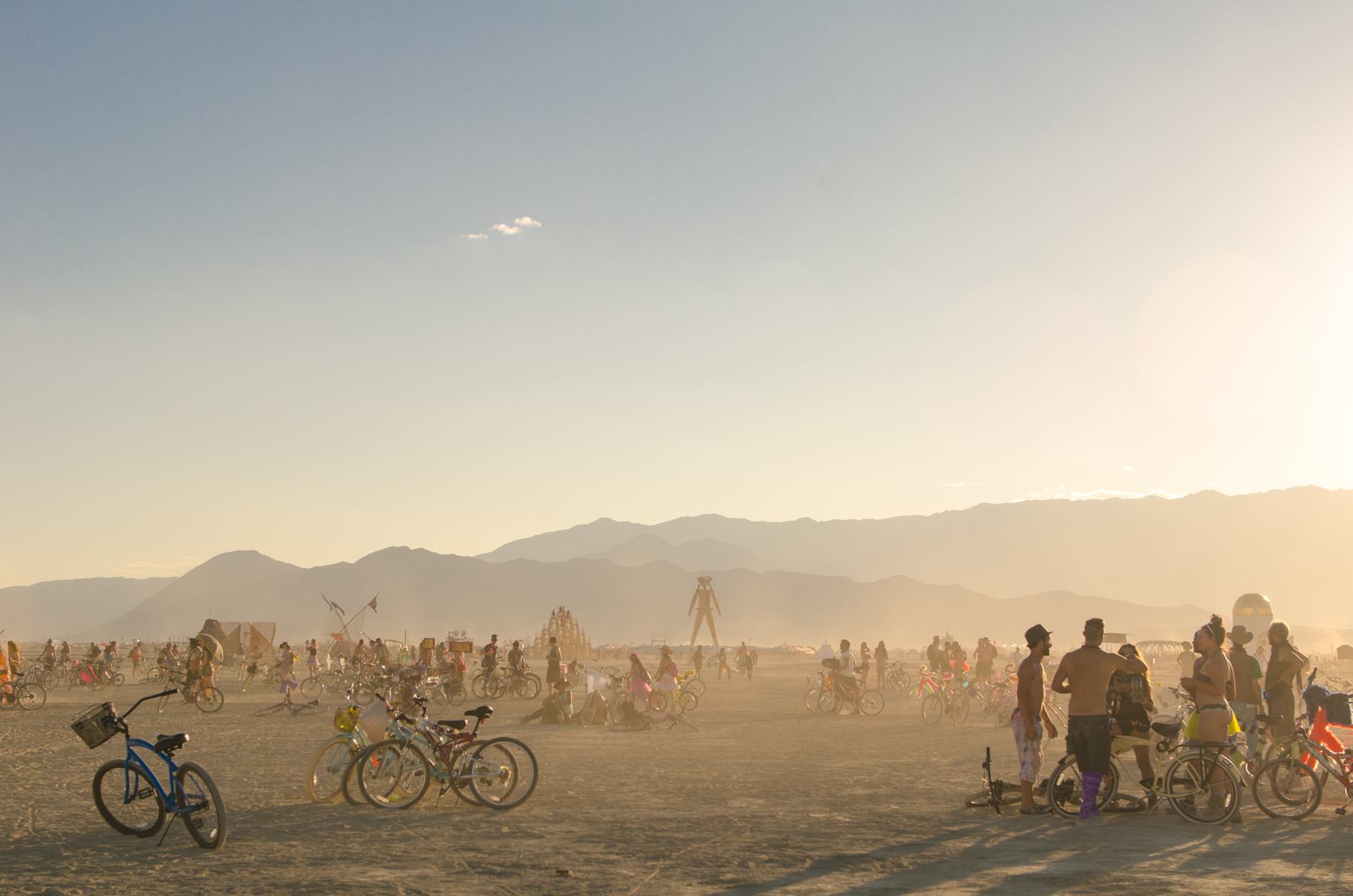 The Playa at sunset: when the dust and golden light combine to create something truly magical that’s over in less than an hour. 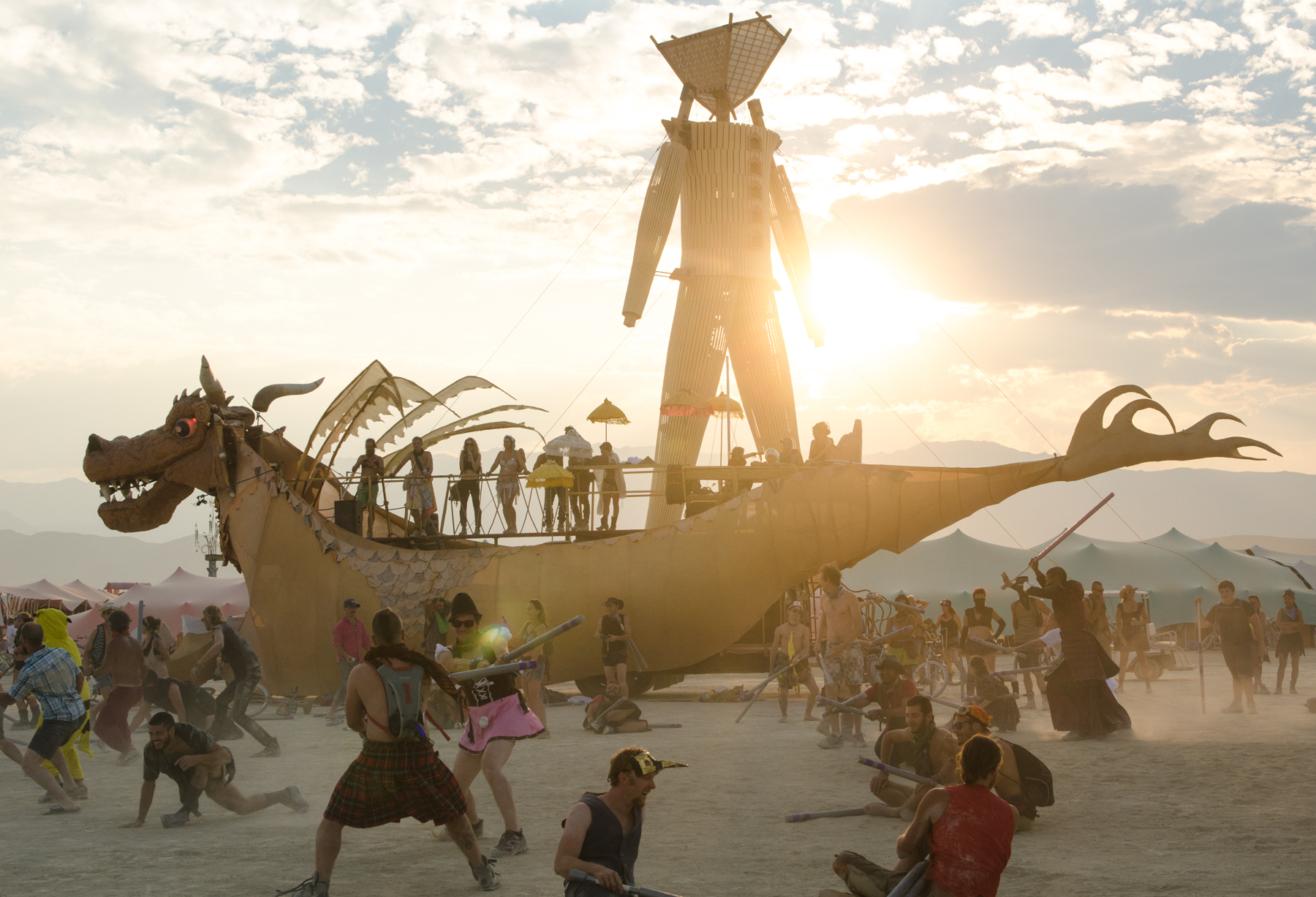 I once stumbled on a sword battle of epic proportions, which looked like something out of Game of Thrones (minus all the snow). 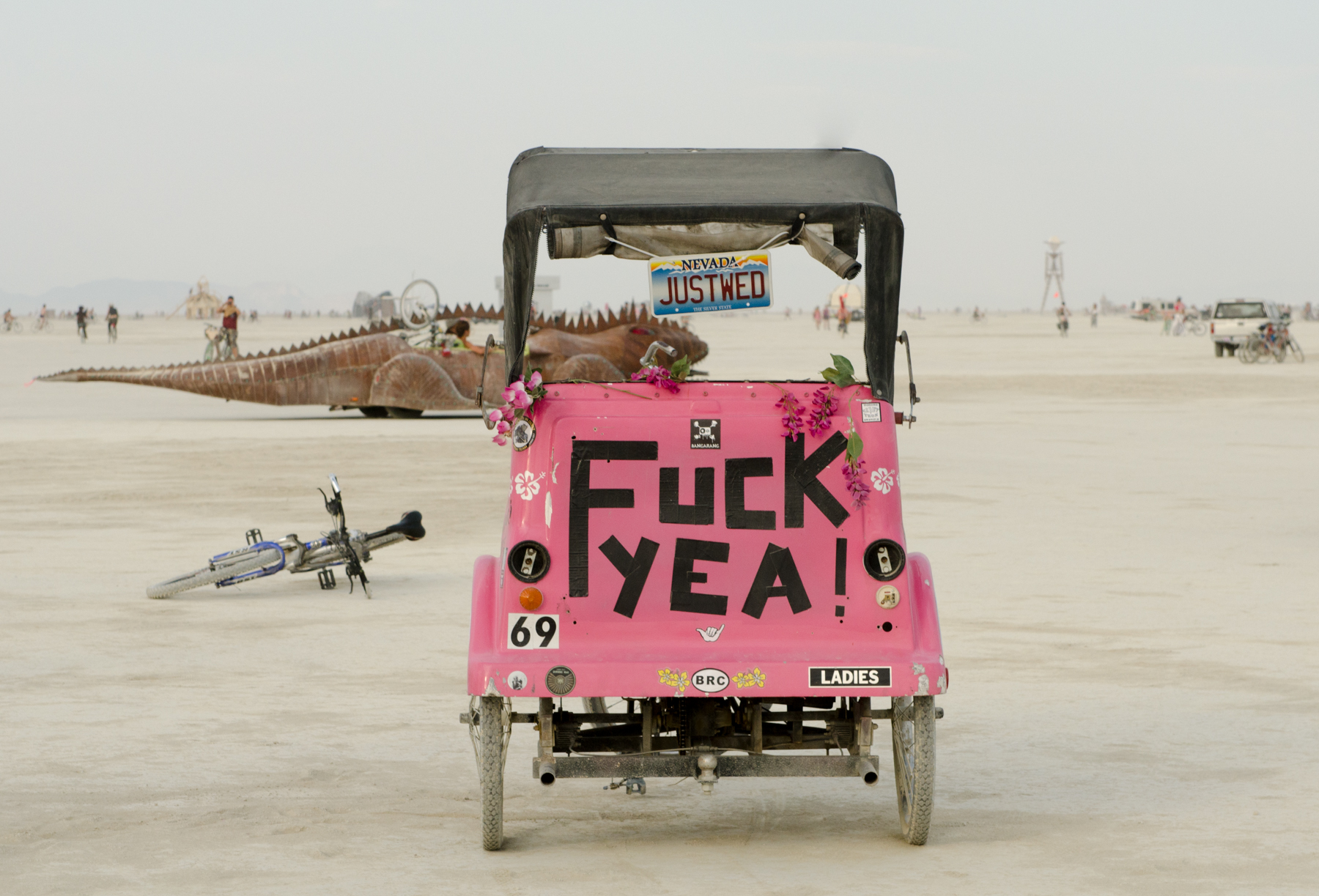 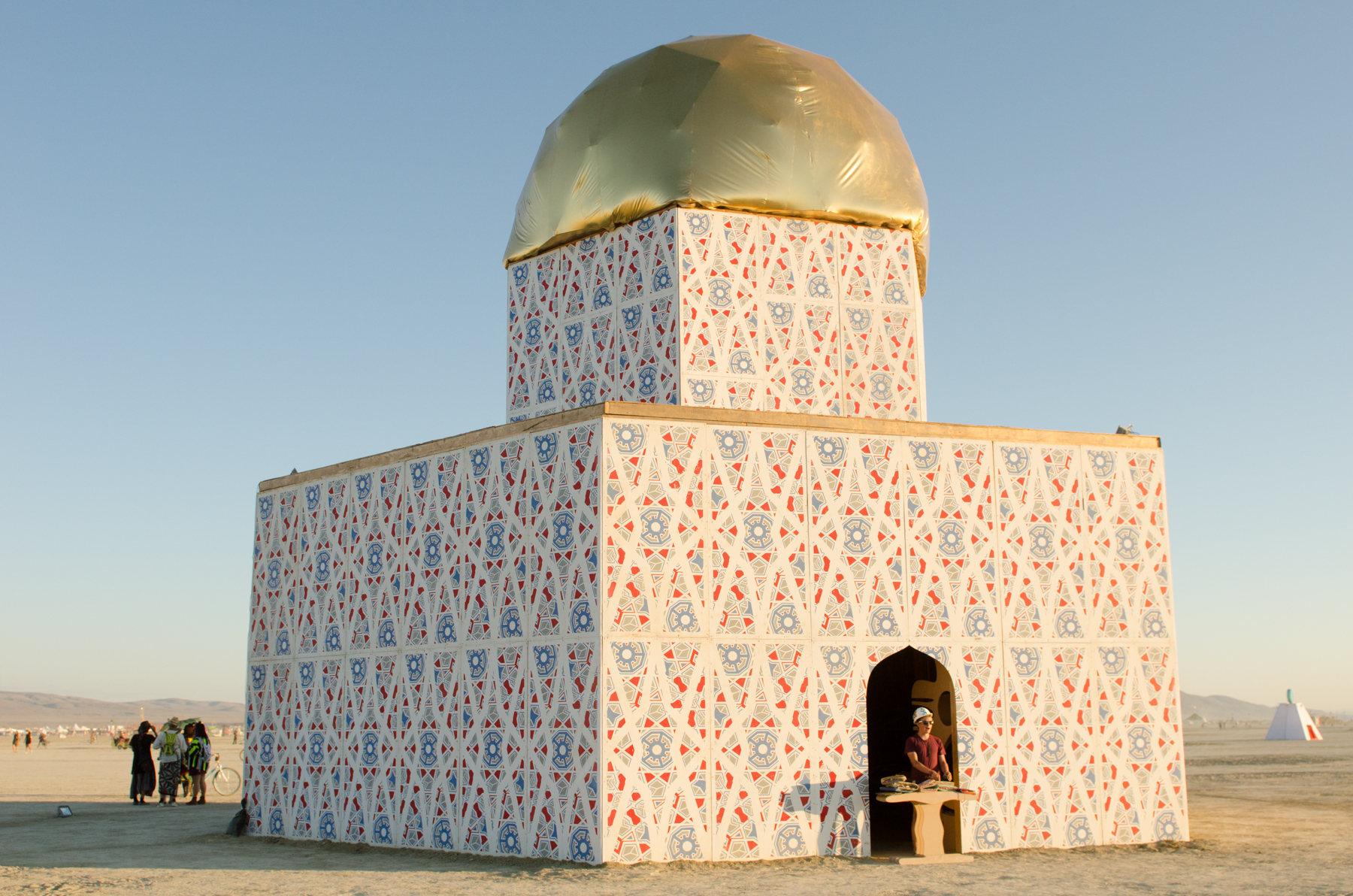 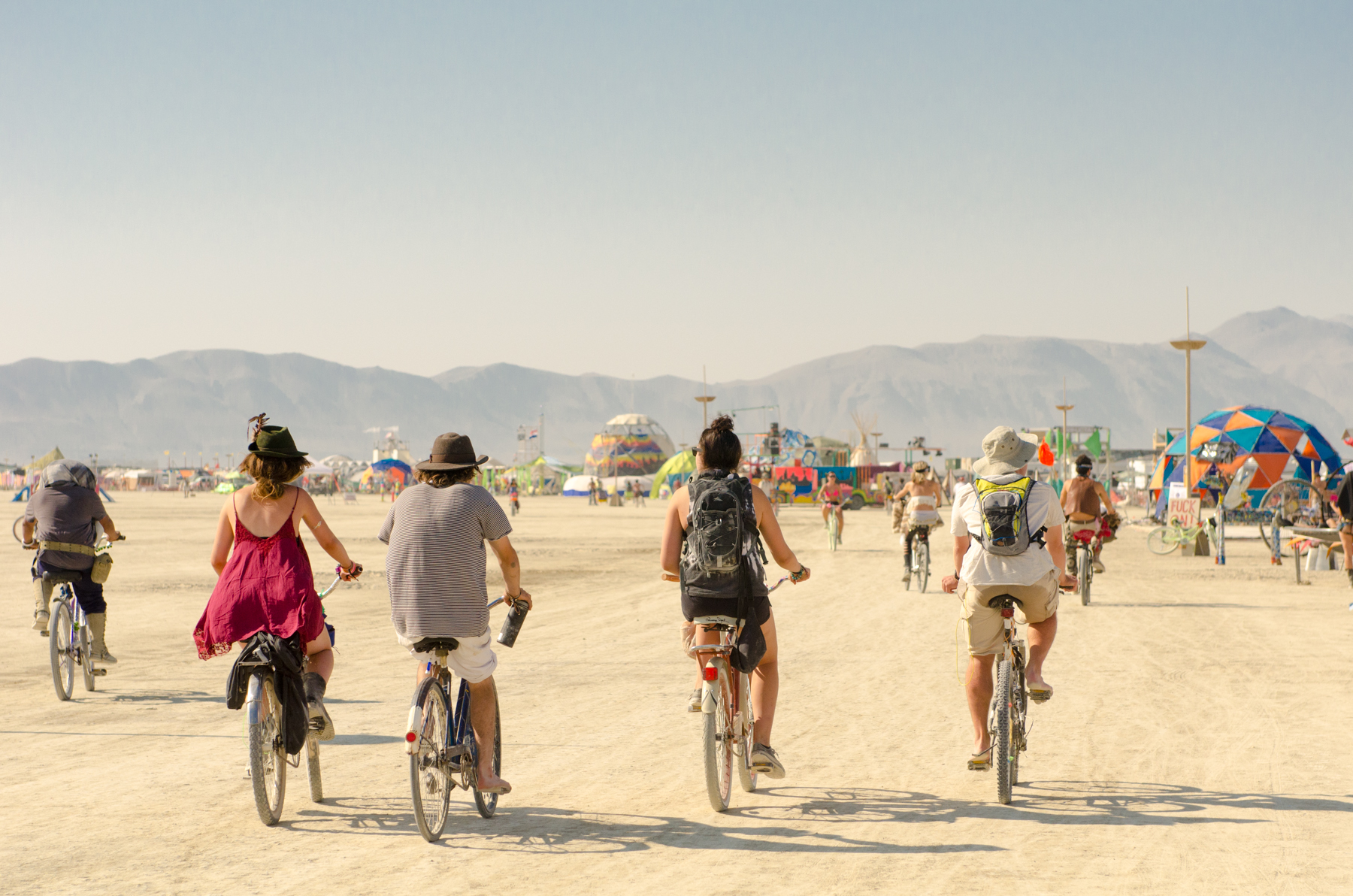 I was glad I bought a bicycle to take to Burning Man – it would take you hours to walk around the city without wheels. 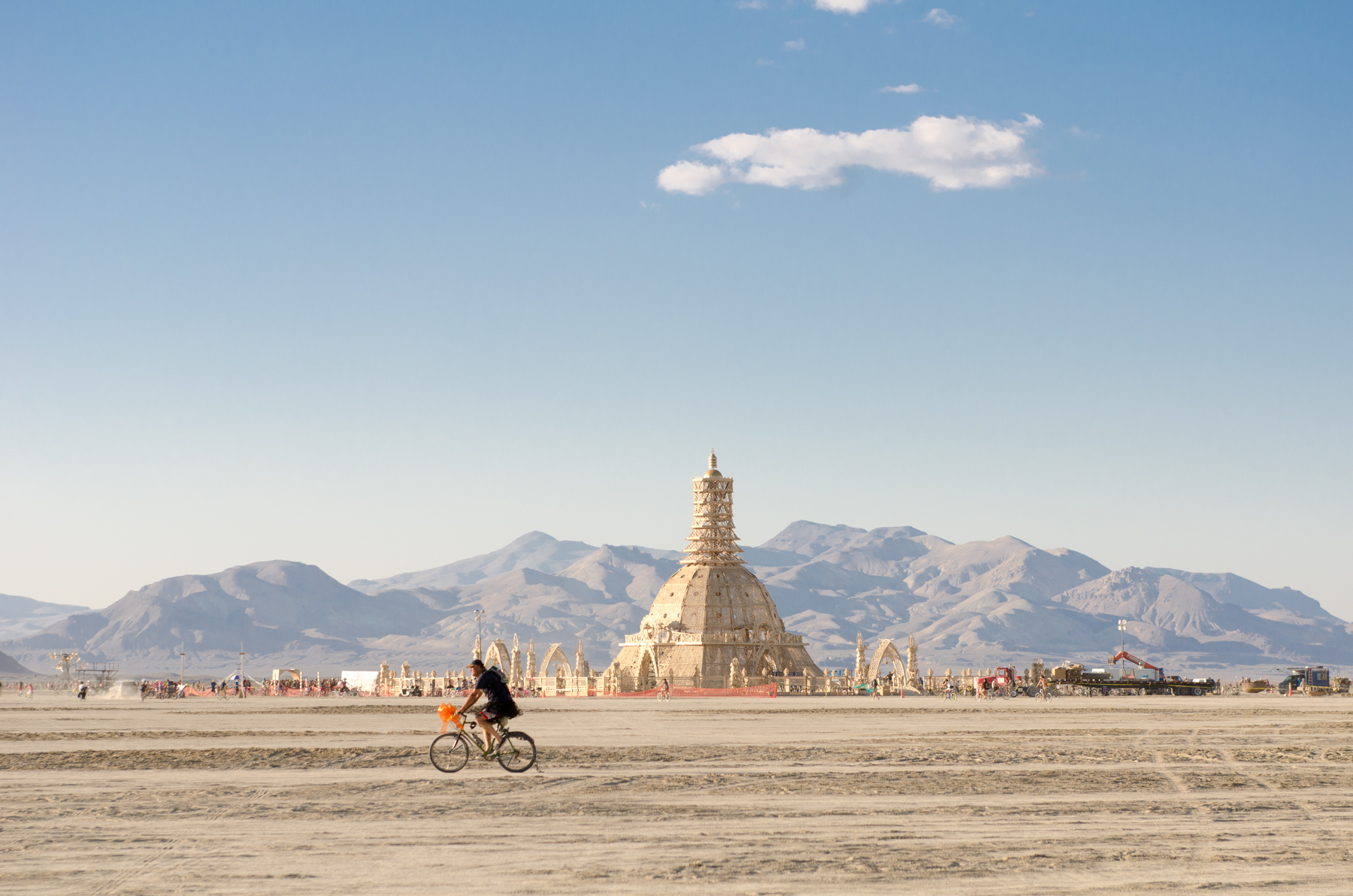 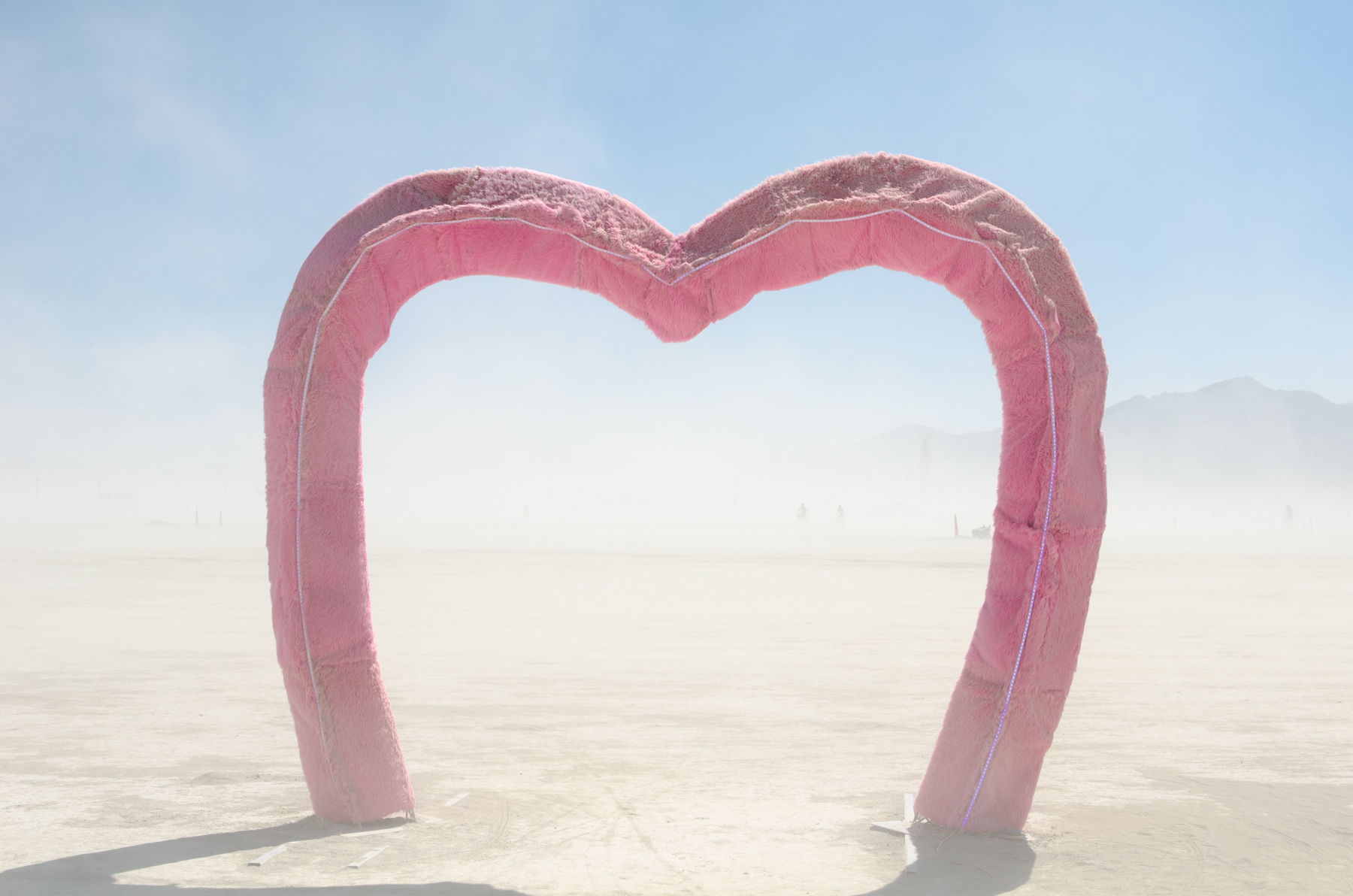 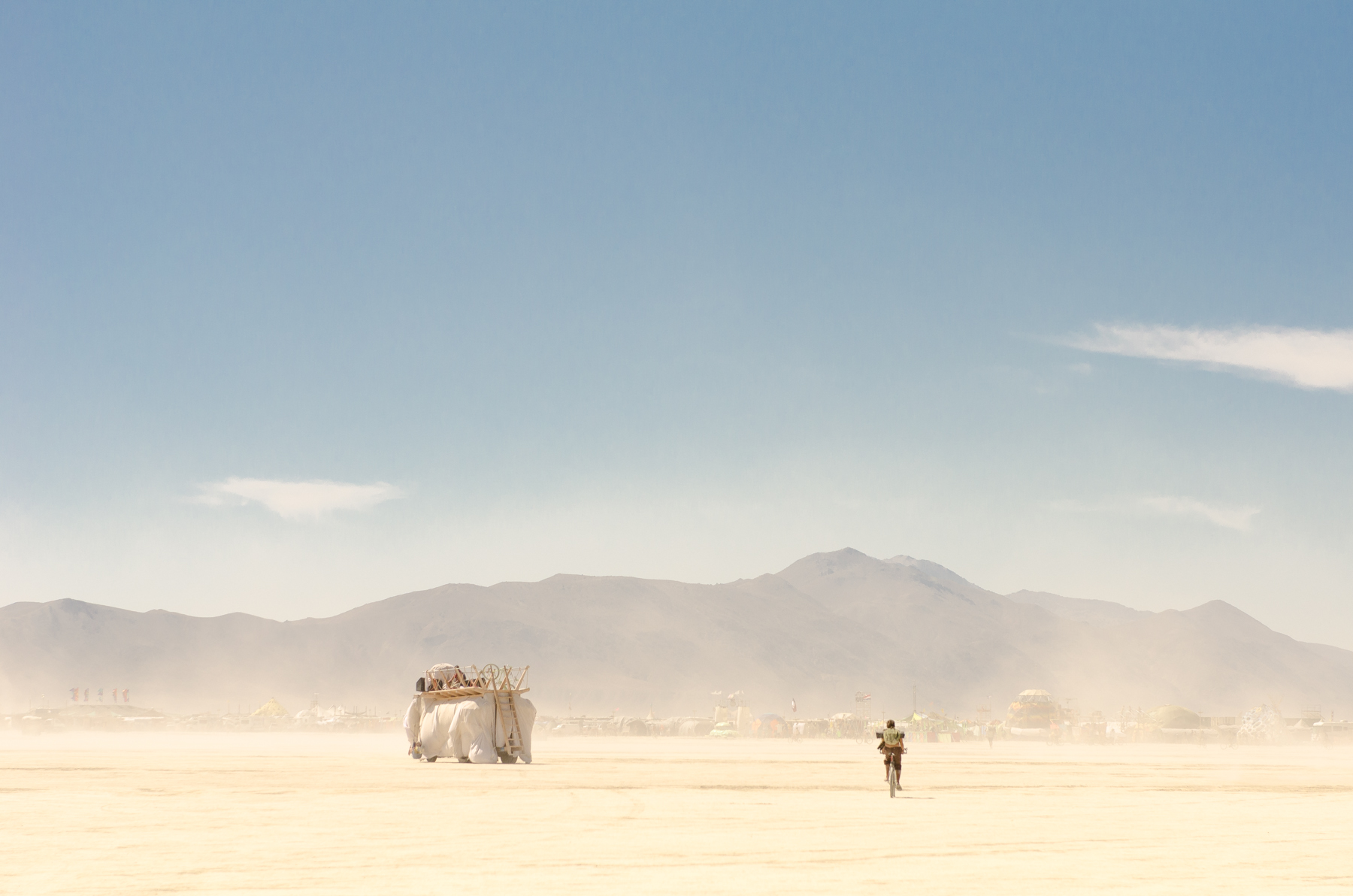 Dust storms at Burning Man are beautiful but painful on the eyes and the camera lenses. 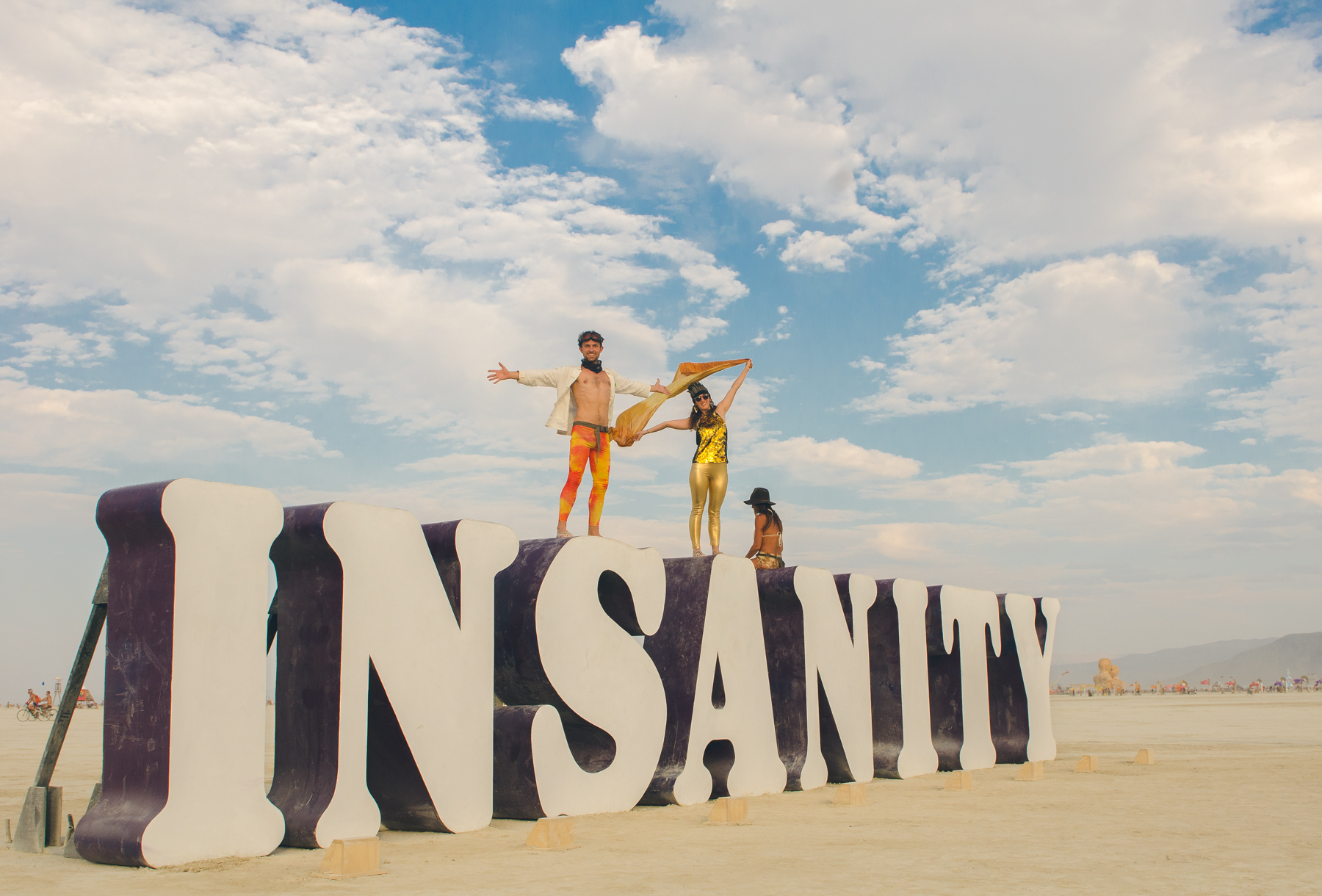 Me in gold tights, feeling blissfully happy to be on top of Insanity, on the Playa, at Black Rock City. 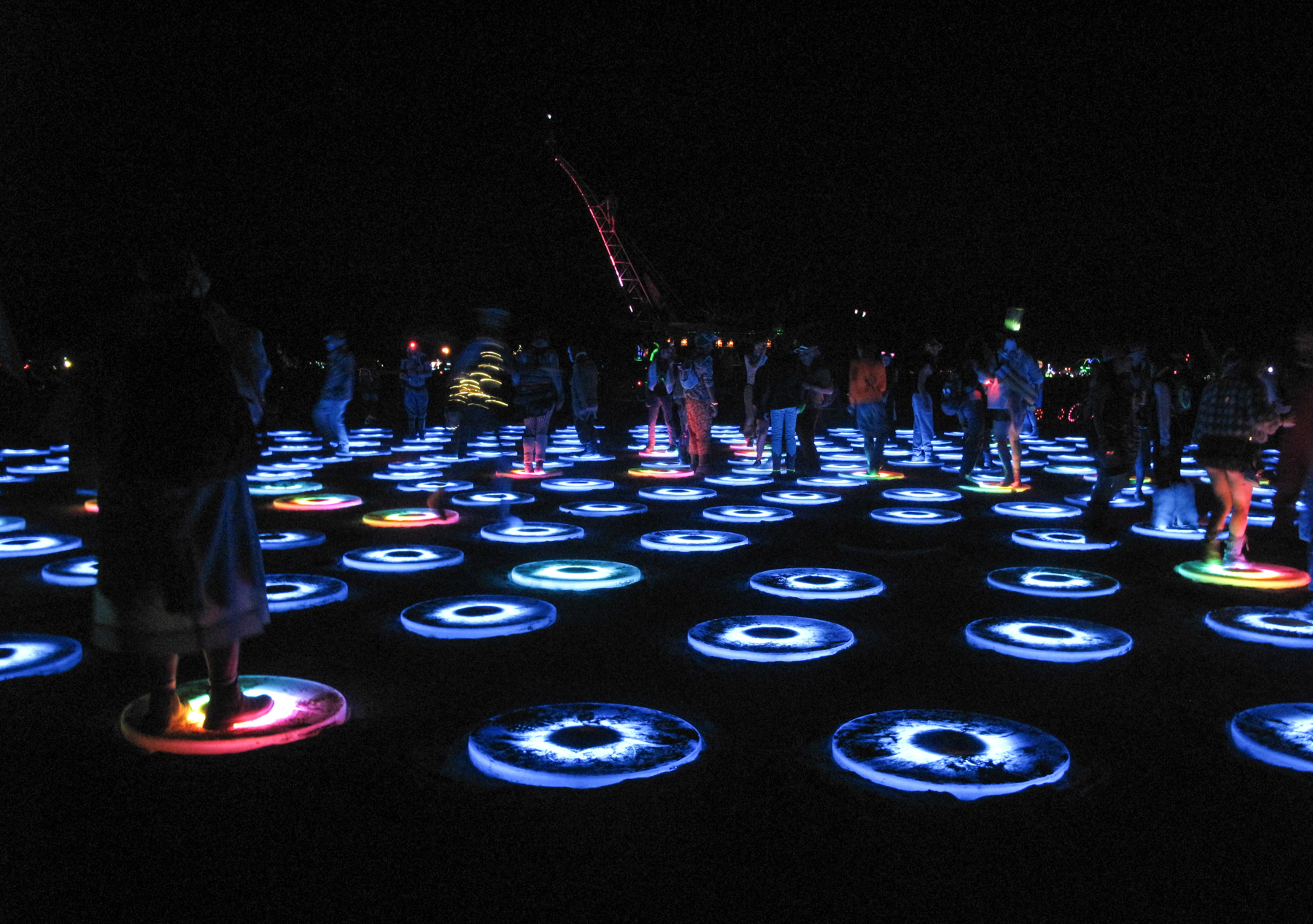 The Superpool: LED lilypads that lit up when you stepped on them. People were running around, laughing and screaming and I felt like were all about five years old again. 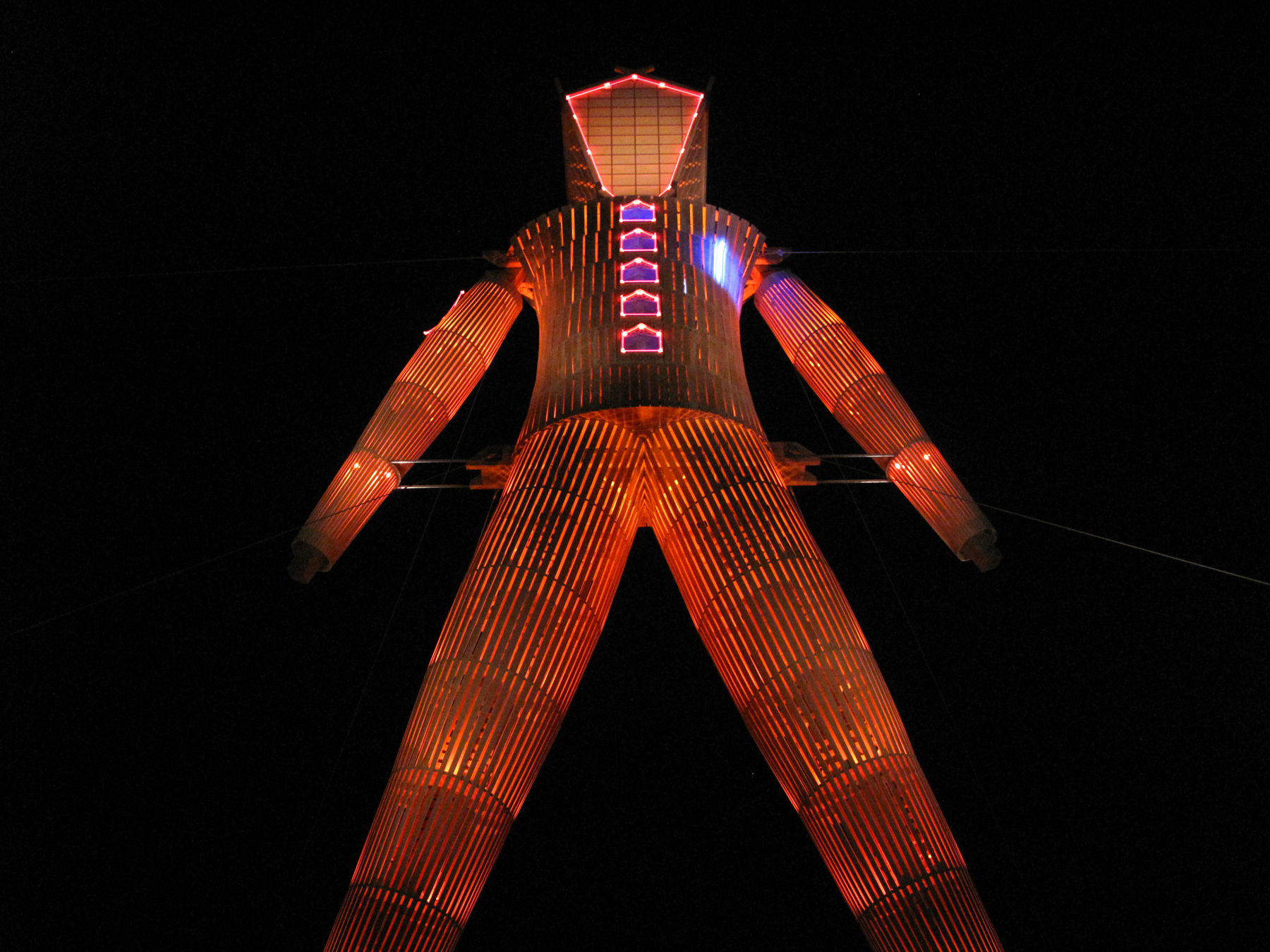