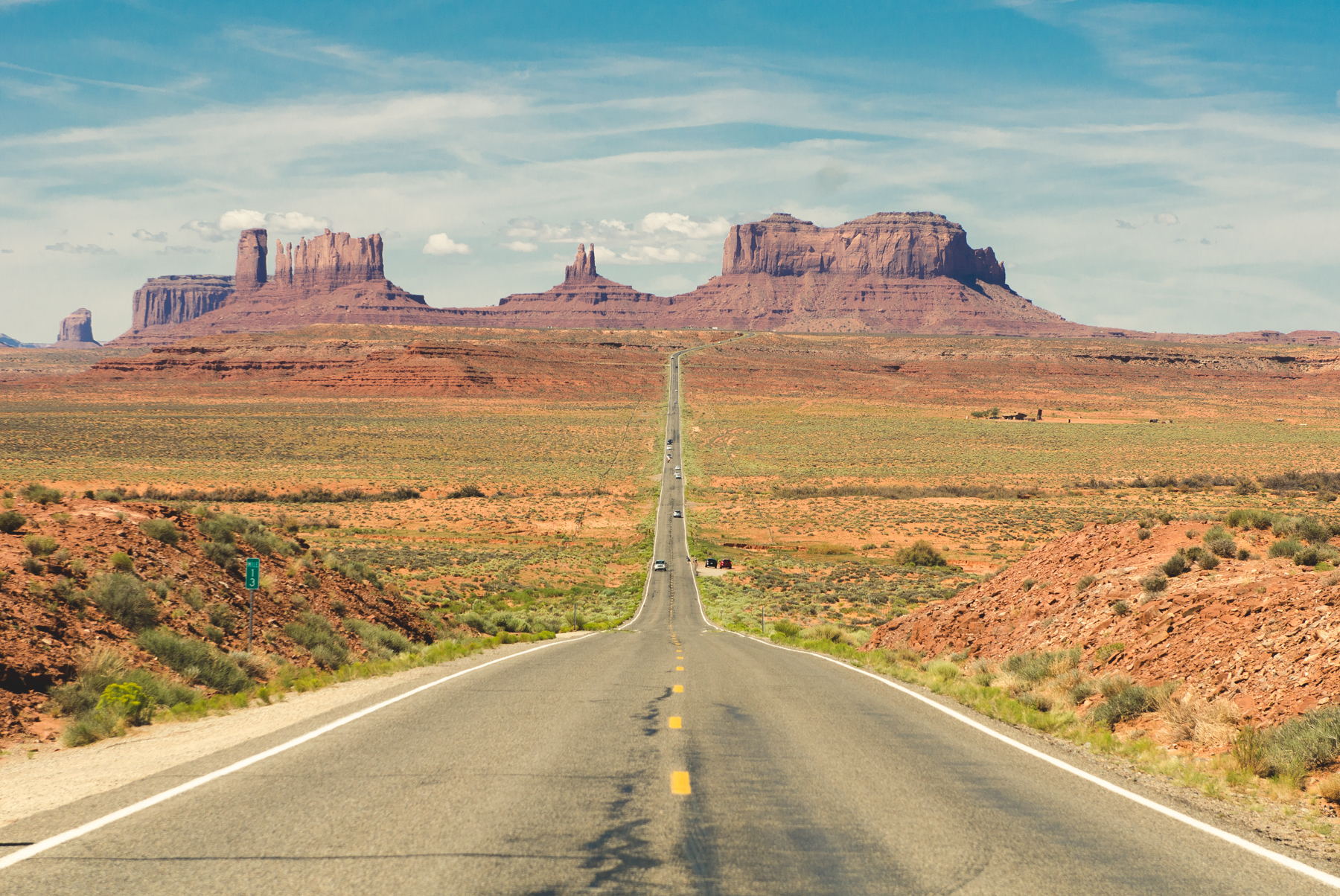 Route 163 in Utah, my favourite drive of the trip.

Road tripping is my favourite way to travel. The constant movement, the feeling of possibility, the ever-changing landscapes and skies, the silence of empty roads, the fleeting glimpses of how other people live, the waves of thoughts that come with seeing new things every day.

I’ve always wanted to drive across the States: a vast, infinitely interesting country that’s the ultimate been romanticised as the ultimate road tripping destination in popular culture for decades. So, accompanied my good-at-map-reading boyfriend, I journeyed from New York to San Francisco over three weeks in a Hyundai Elantra (not exactly the stuff of road tripping movies but great on gas consumption). Sixteen states and 7000 kilometres later, it was the best road trip I’ve ever done.

We listened to blues music and honky tonk in Nashville, fell in love at first sight with New Orleans and its gothic edge, romantic architecture, amazing food and sweaty live music bars of Frenchmen Street, met some of the friendliest people in the world and ate deep-fried everything out of graffitied food trucks in Austin, found the most unexpected enclave of artists in middle-of-nowhere Marfa, drank Aztec hot chocolate in beautiful, arty Santa Fe, escaped the searing heat of the New Mexican desert in the Carlsbad Caverns 70 storeys below ground, and explored the lunar world of Monument Valley on the border of Utah and Arizona getting blasted by dust.

At the Grand Canyon we did everything wrong: we arrived in the evening and just missed what looked like the best sunset ever, forgot to buy wood so we didn’t have a campfire, didn’t bring food so had to eat in the fluorescent-lit cafeteria and woke up late and missed sunrise. Despite that, being at the Grand Canyon was quite literally overwhelming – I felt microscopic and pointless peering into the deep crevasse formed by six million years of geological and natural forces and touching rocks that are 2000 million years old. It was a sublime experience in the true sense of the word.

Las Vegas was everything I thought it would be: loud, brash, utterly hedonistic, totally surreal but also surprisingly mesmerising. I gambled with $1, won $2, felt a sudden thrill of excitement and possibility, and then lost my money the next second and decided never to gamble again. To the west, we came to the ocean on the other side of the continent in palm-tree flecked Los Angeles, and traced the coastline north on Highway 1 through Big Sur (big mist-covered cliffs, big redwoods, big views we stopped every few kilometres for, camping under pine trees near deserted beaches). We drove into a foggy San Francisco, the most liberal city in the US (and proud of it) – a place of Beat generation bookshops, vegan organic restaurants, beautiful street art, pavement signs exhorting Noam Chomsky to “chill out and smoke ganja”  and billboards advertising everything tech. The end of the trip was a week at Burning Man – a gathering of 70 000 people in the Nevada desert that defies a simple description. More than a festival, it’s like a break from the “normal” world, an experiment in living in a totally different society (read more about my experience here).

The USA is the most astoundingly diverse country I’ve ever been to. Each state feels like a different place entirely, with its own lingo, food, architecture and regional gas station snacks, from Cajun peanuts in Louisiana to tamales in Texas – though it was not all pretty or inspiring: much of the drive was through sprawling centreless and featureless towns of fast food chains, pawn shops, trailer parks and used car dealerships. We were happiest when we were in the huge unpeopled spaces of the country – the immense and beautiful Texan desert, where we drove for miles under limitless blue skies without seeing another car, stretches of New Mexico where a desert palette of yellow, green, dusky red mountains and grey-blue rain clouds looked like a painting and the emptiness of southern Utah – terracotta sand littered with dramatic sandstone formations – which feels like the place where time began.

I took hundreds of photos and wrote enough notes to fill an entire book – a bit too much for this one blog post. Instead, here’s a small selection of my favourite places, roads and views. 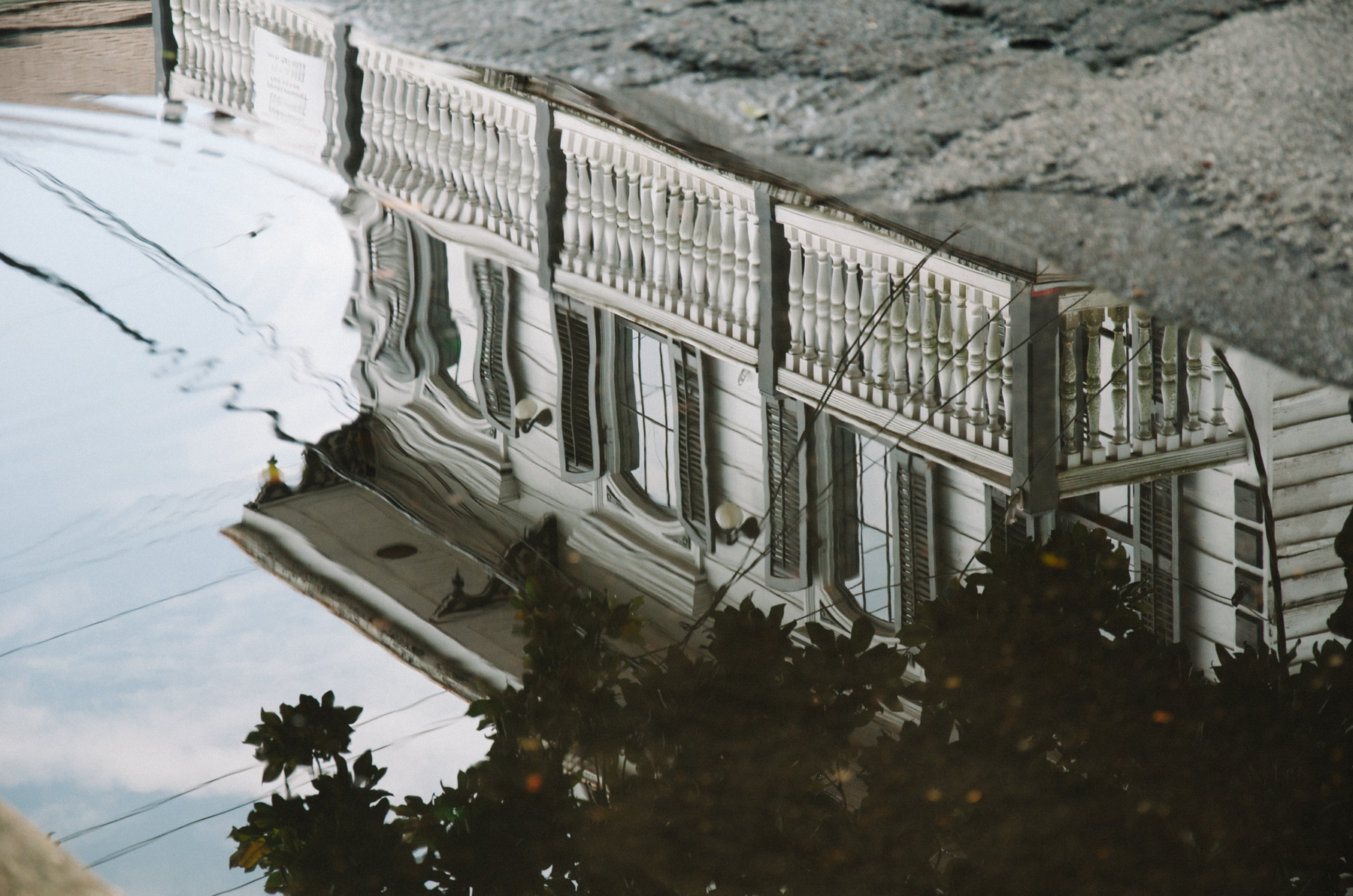 New Orleans is like nowhere else in the US: a city with layers of history 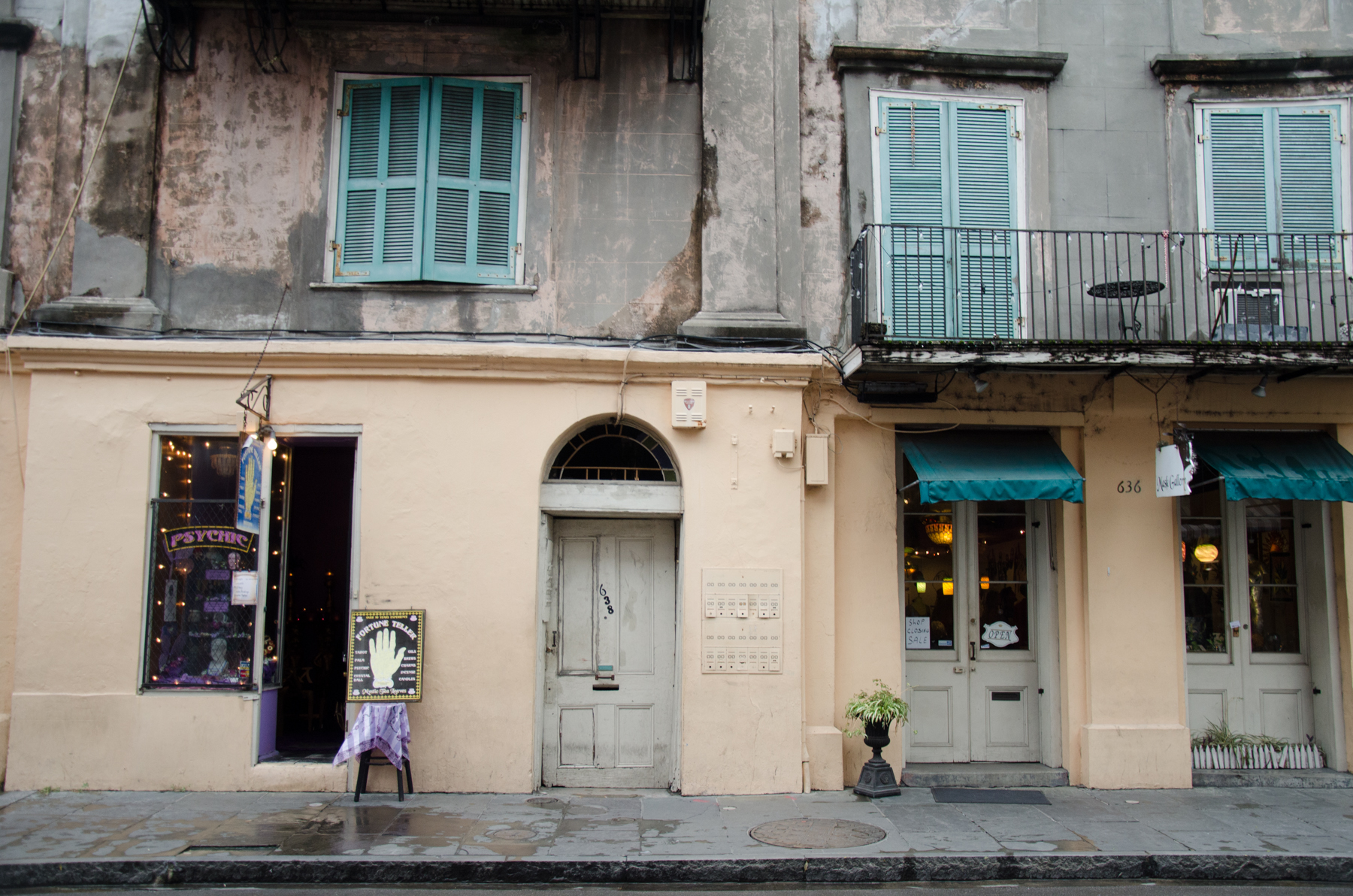 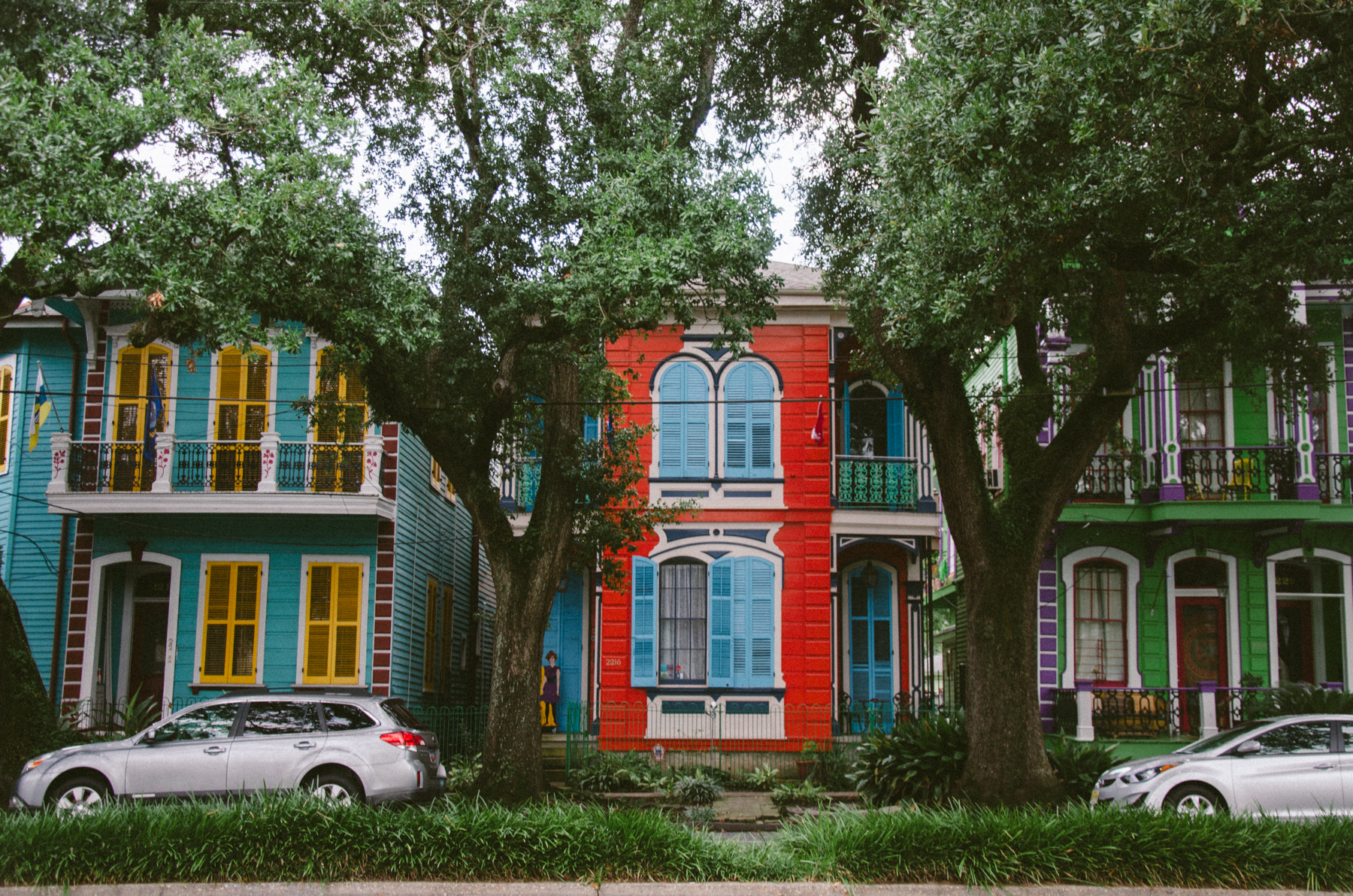 The best place we stayed on the trip was La Belle Esplanade, a small guesthouse in a beautiful century-old primary-red building, with quirky pink-and-purple rooms and buttermilk drops made by an actor from Beasts of the Southern Wild for breakfast. 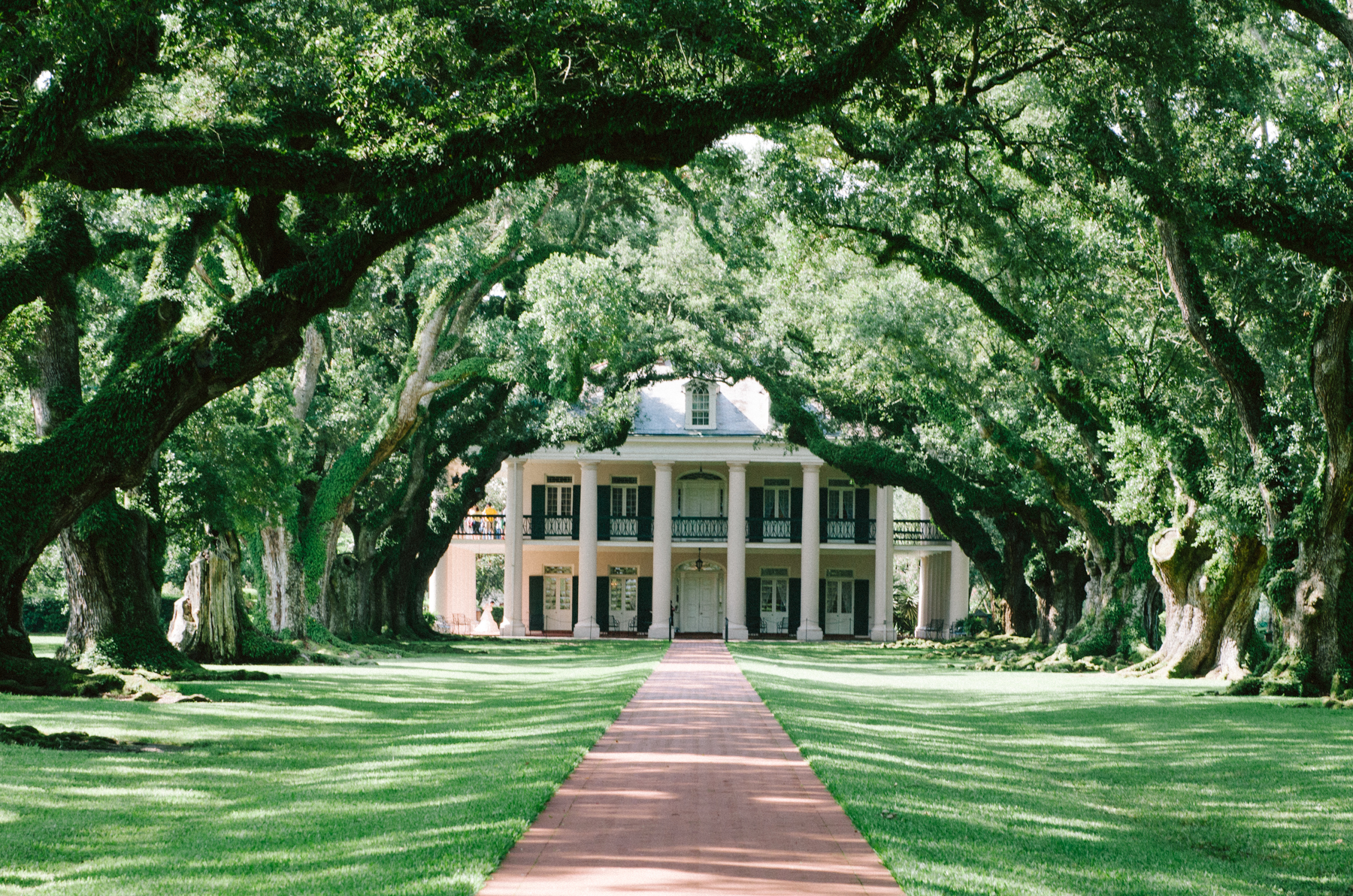 Louisiana roadside stop: Oak Alley – a beautiful plantation mansion (that doesn’t gloss over its dark history) with a famous avenue of 300-year-old oaks. 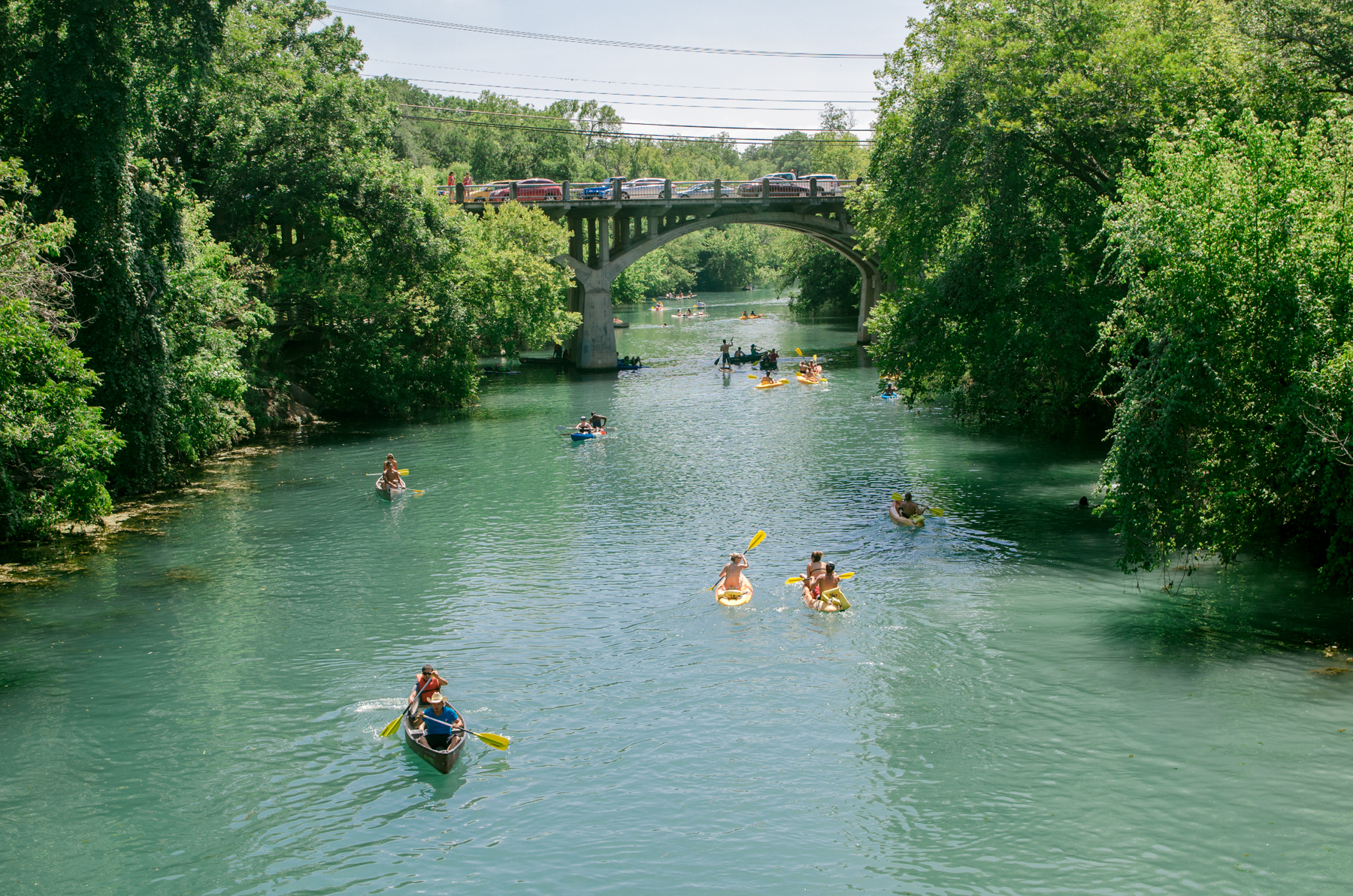 Cooling off in the 40-degree Texan heat in the deliciously cold Barton Springs, in the middle of the city in Austin. 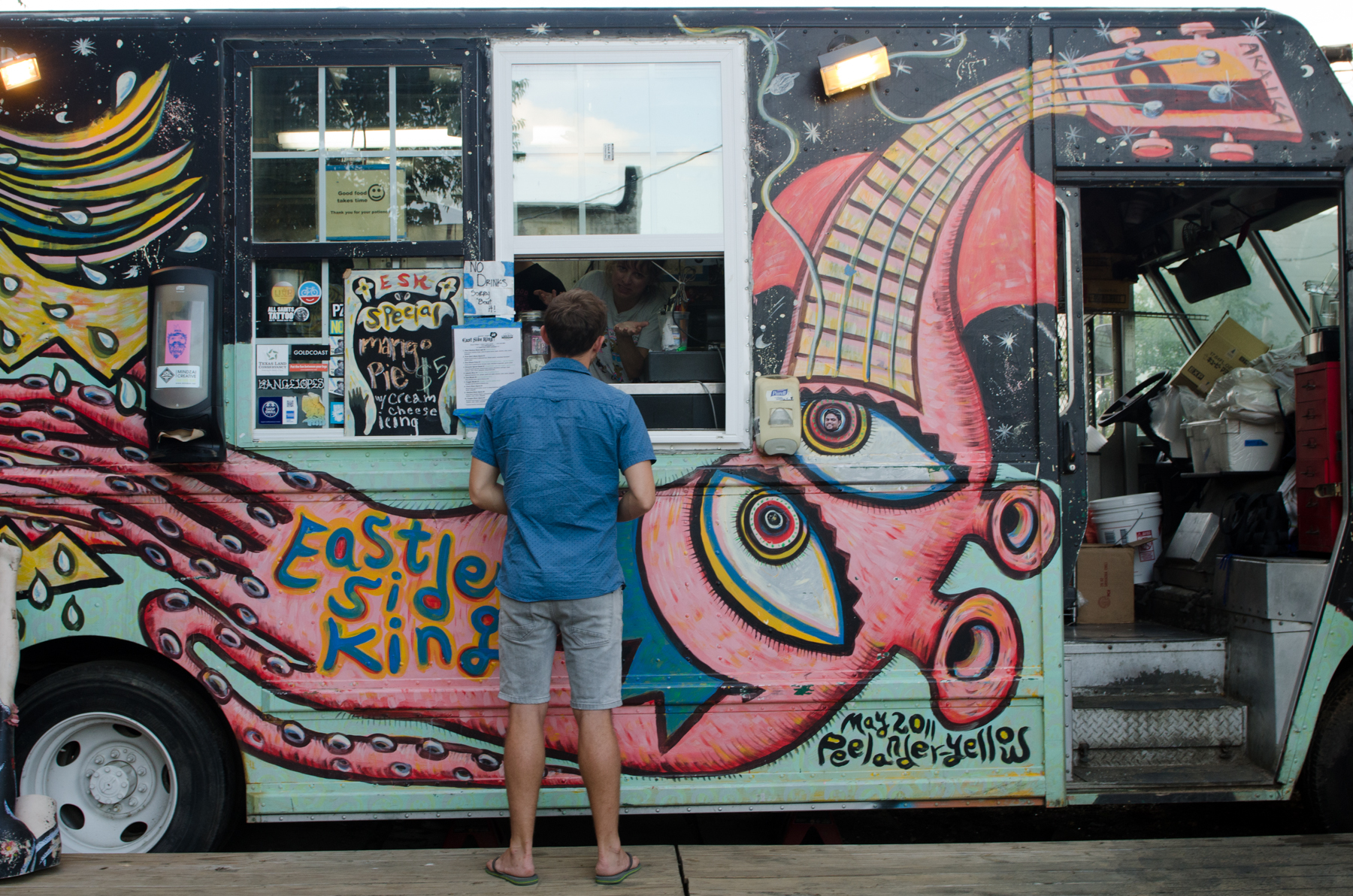 East Side King, an award-winning food truck serving up incredible Asian food from the courtyard of a dive bar – just one of Austin’s 1000 food trucks. 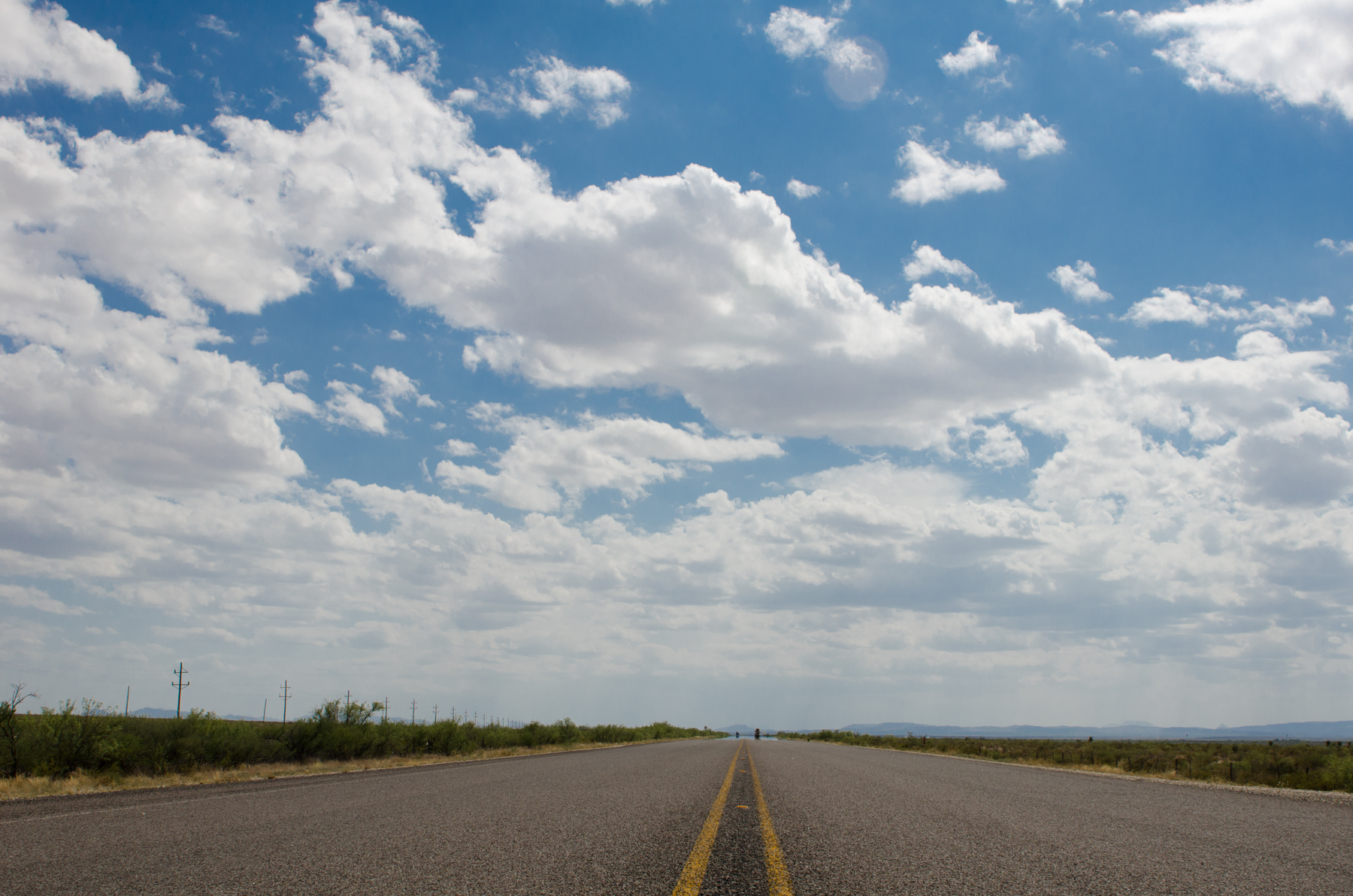 Getting off the interstate in Texas was a good idea: it meant a longer drive from Austin to Marfa but much more beautiful road scenery. Driving through the desert I kept expecting tumbleweeds to roll across the road 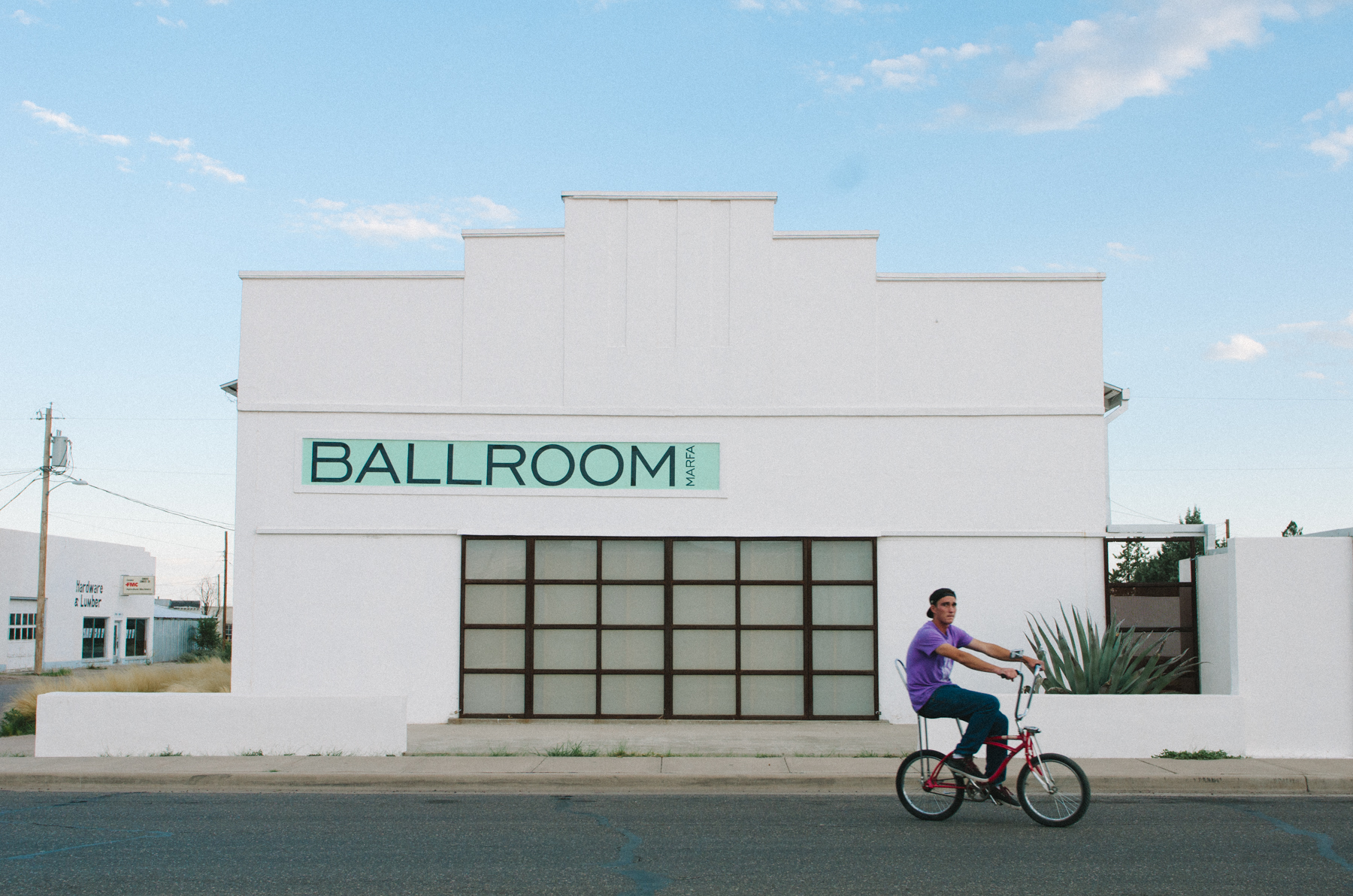 Marfa: hard to get to and even harder to explain but once you are there you get it. A tiny out-of-the-way town of minimalist art, galleries, people in arty glasses and ranchers in cowboy hats and gourmet restaurants and food trucks surrounded by the Texan desert. 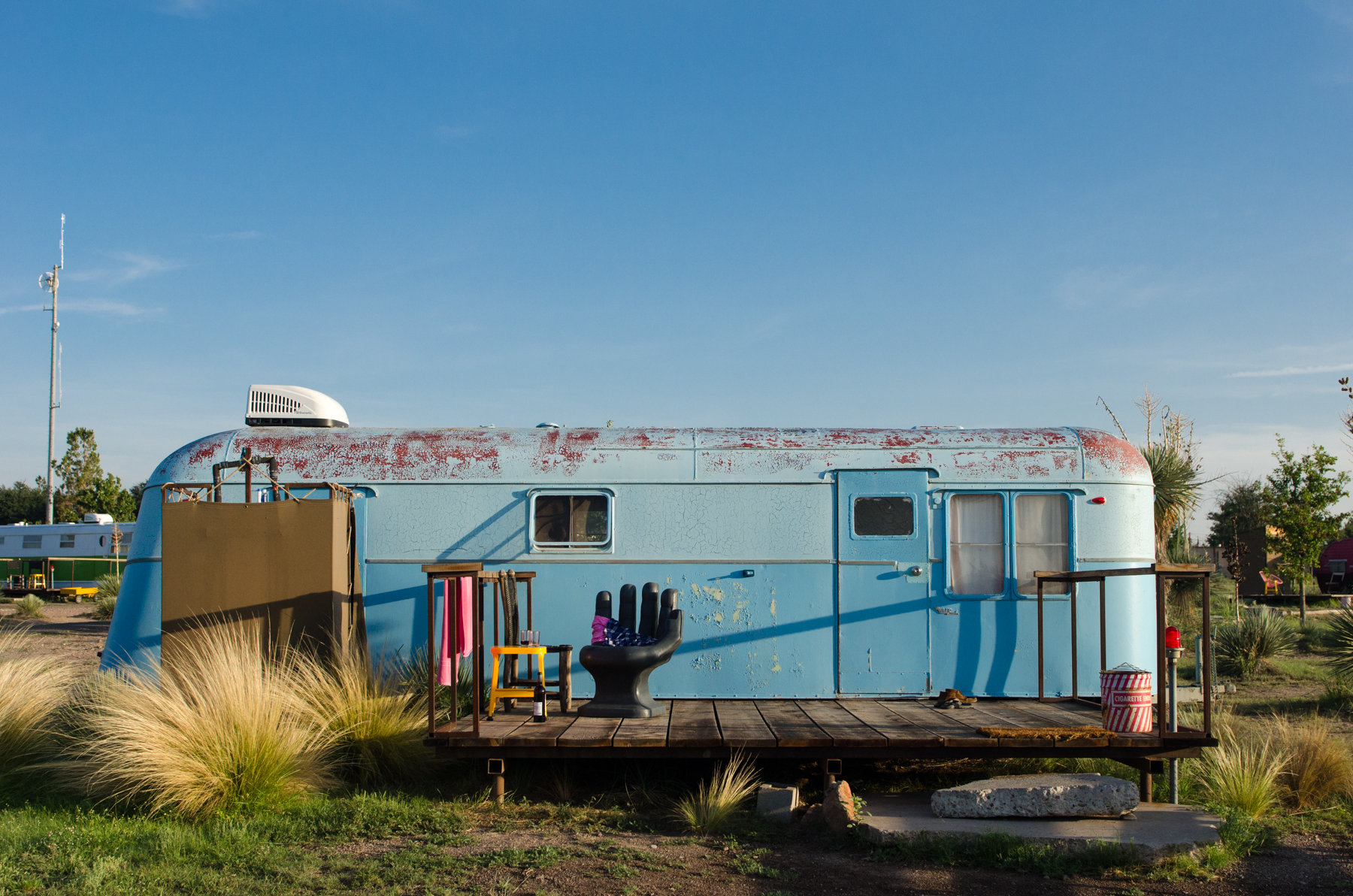 El Cosmico is definitely the coolest place to stay in Marfa: it has arty trailers, yurts, tee pees and lots of shady hammocks and live bands on the weekends. 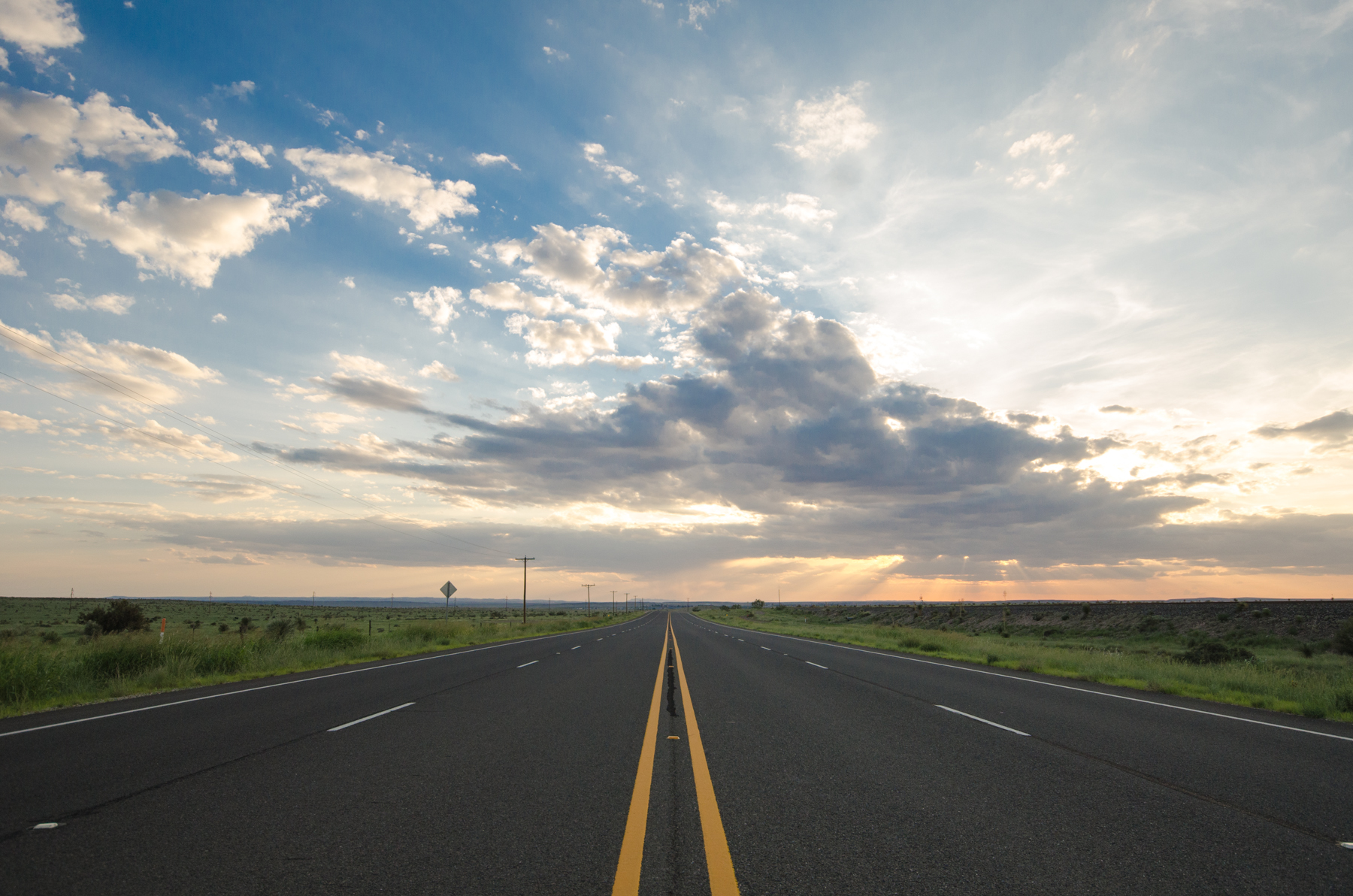 The roads around Marfa are quintessential Texas desert: huge horizons, amazing skies and endless miles of biscuit-coloured desert grass. A fair number of movies, such as No Country For Old Men, where shot here, so this landscape was at once completely new to me and strangely familiar. 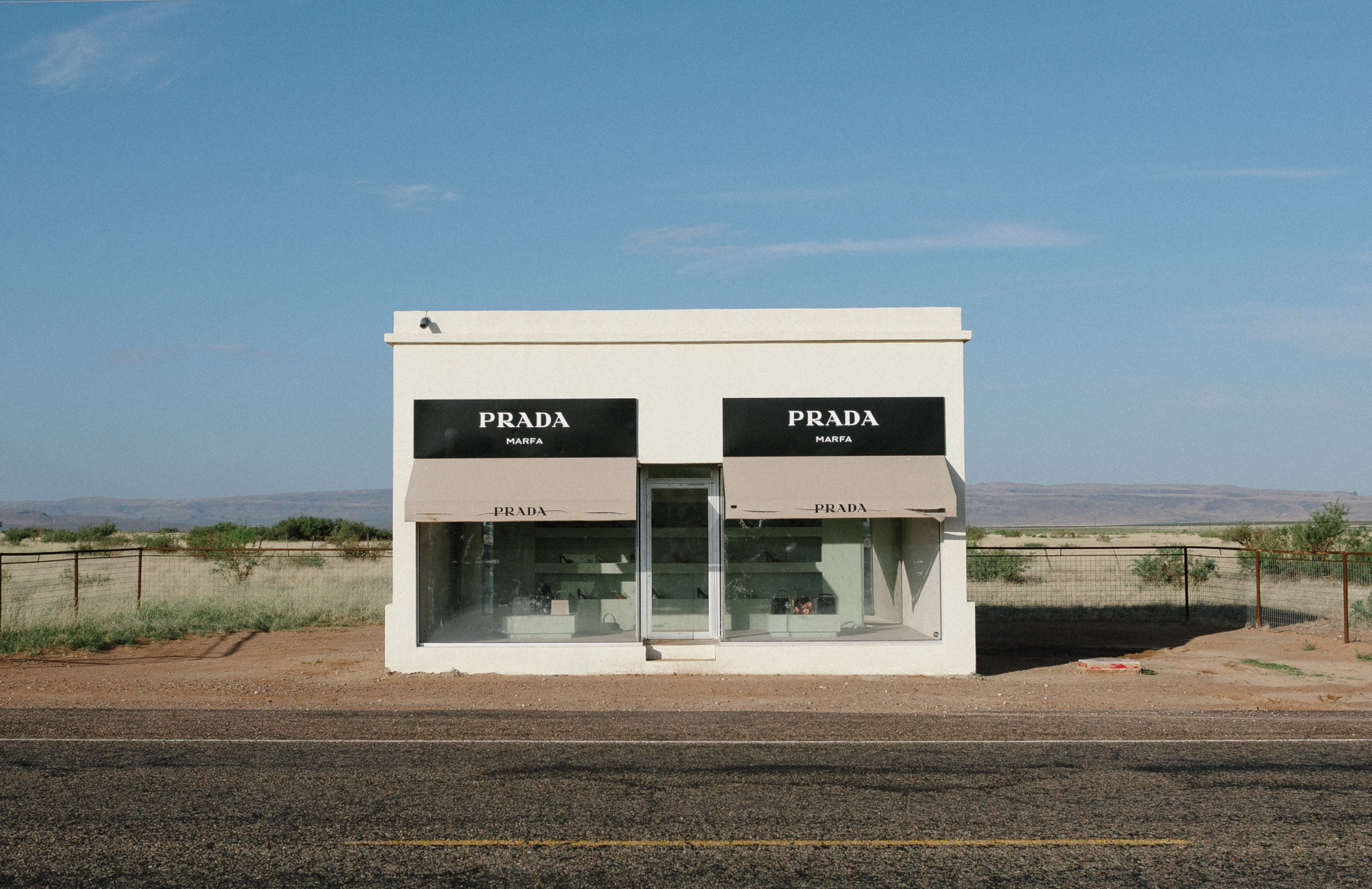 Prada Marfa is probably the world’s most famous Prada shop – except it isn’t a shop, it’s an art installation (complete with Prada handbags and shoes) on a isolated stretch of road outside of Marfa. It’s bizarre and wonderful. 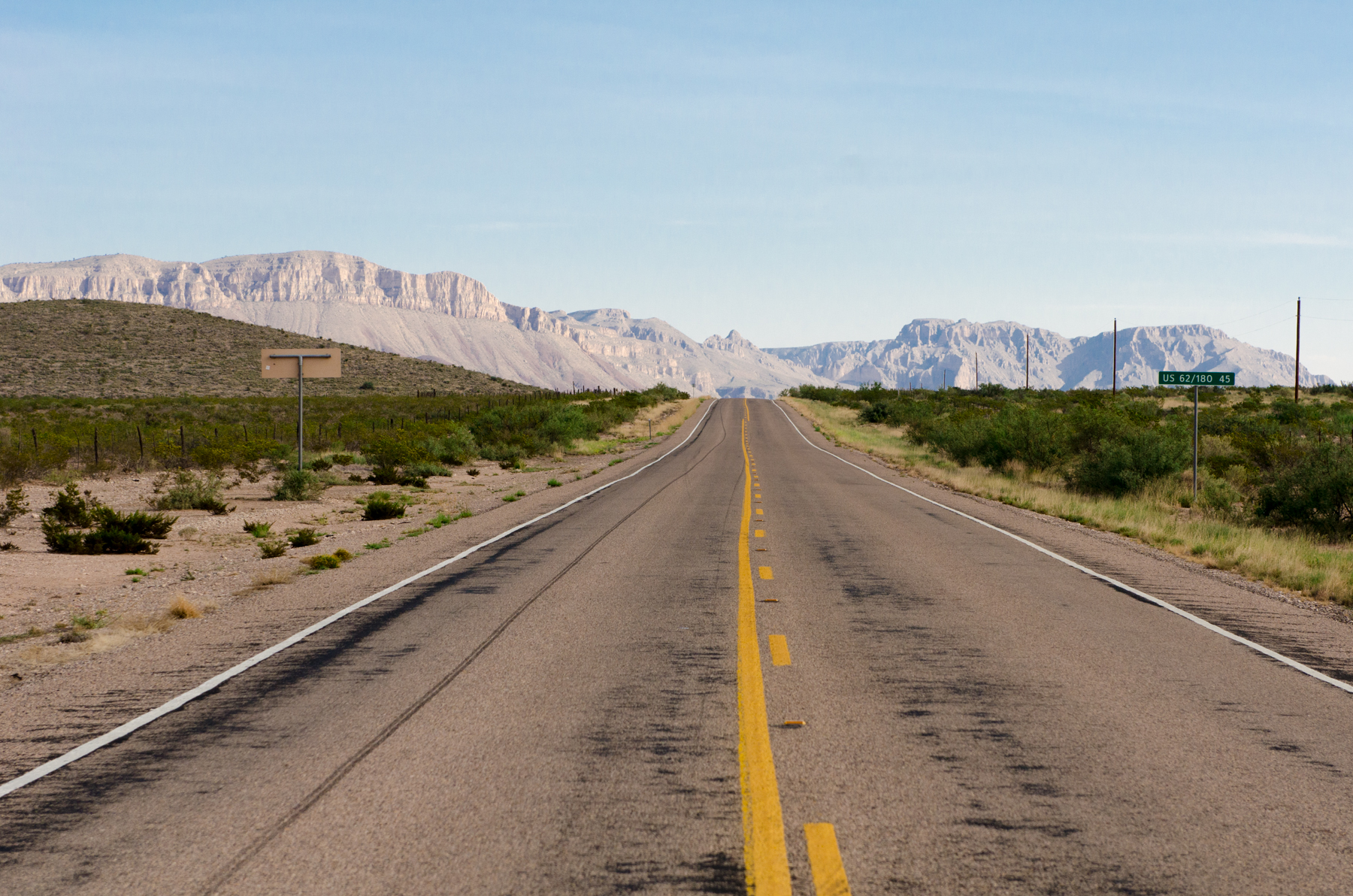 TX-54 North, from Marfa up to New Mexico, was one of my favourite drives of the trip. Hardly any other cars, mountains in the distance and a long winding road. 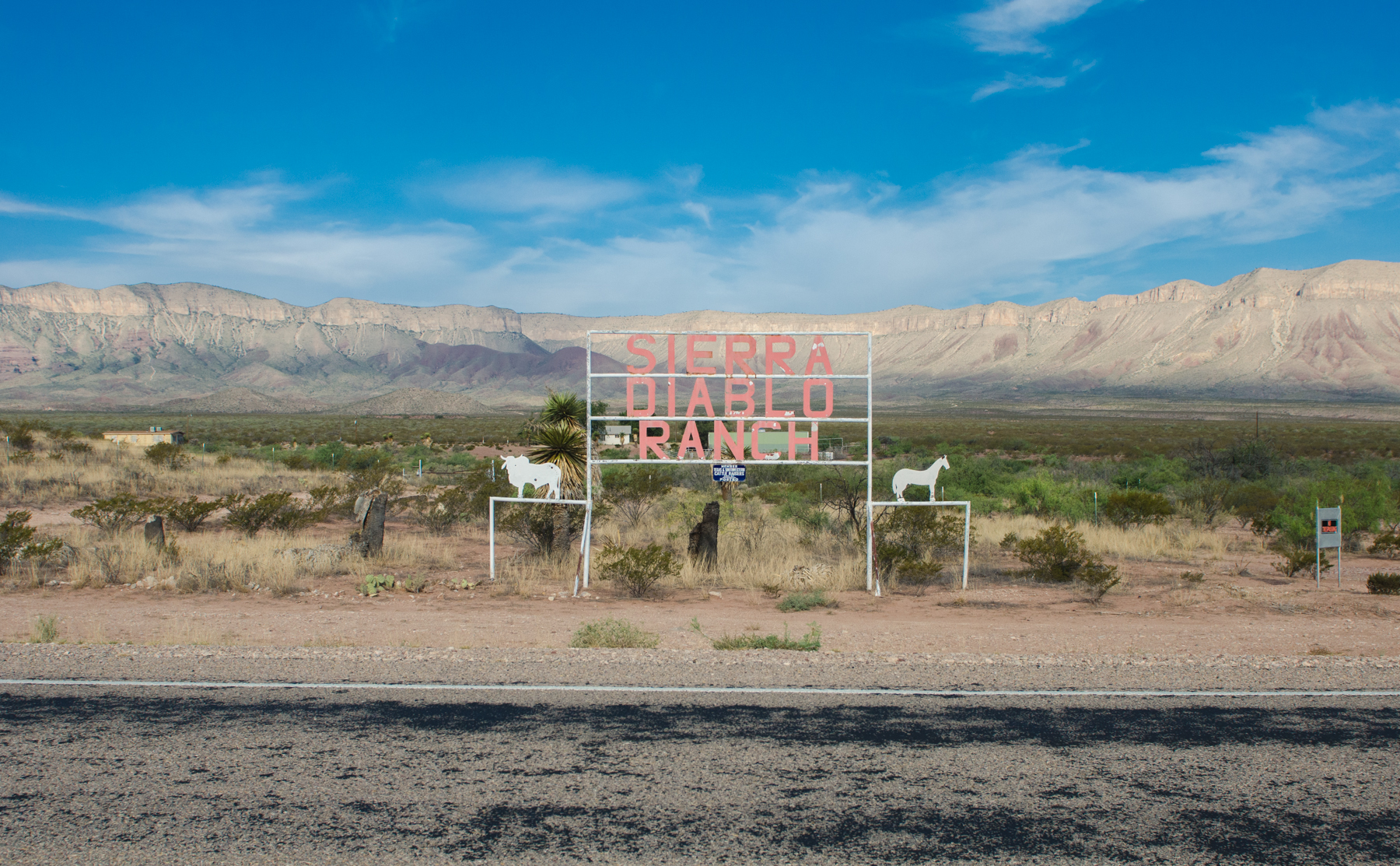 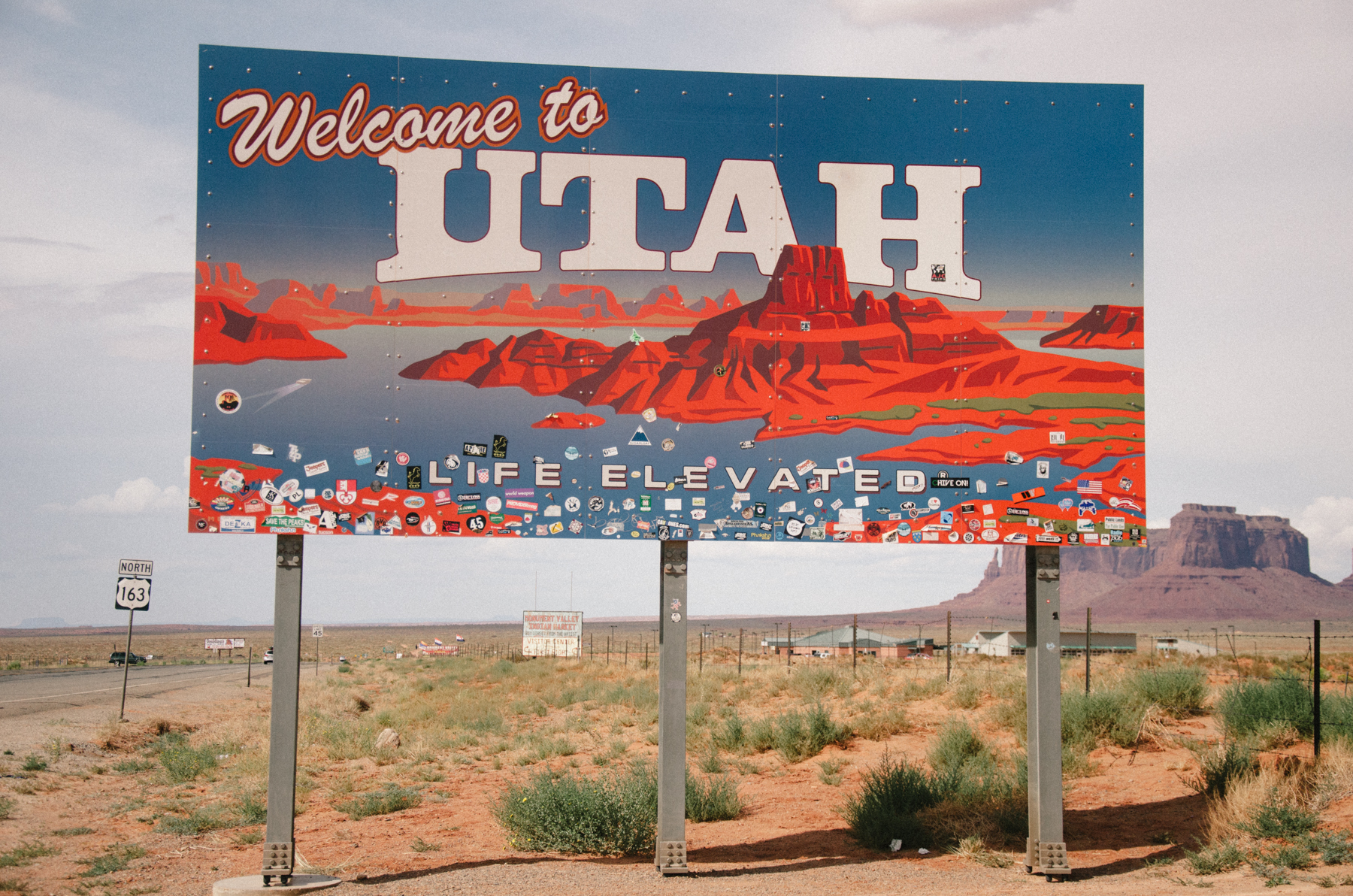 Utah has the best welcome sign of all the states we drove through. 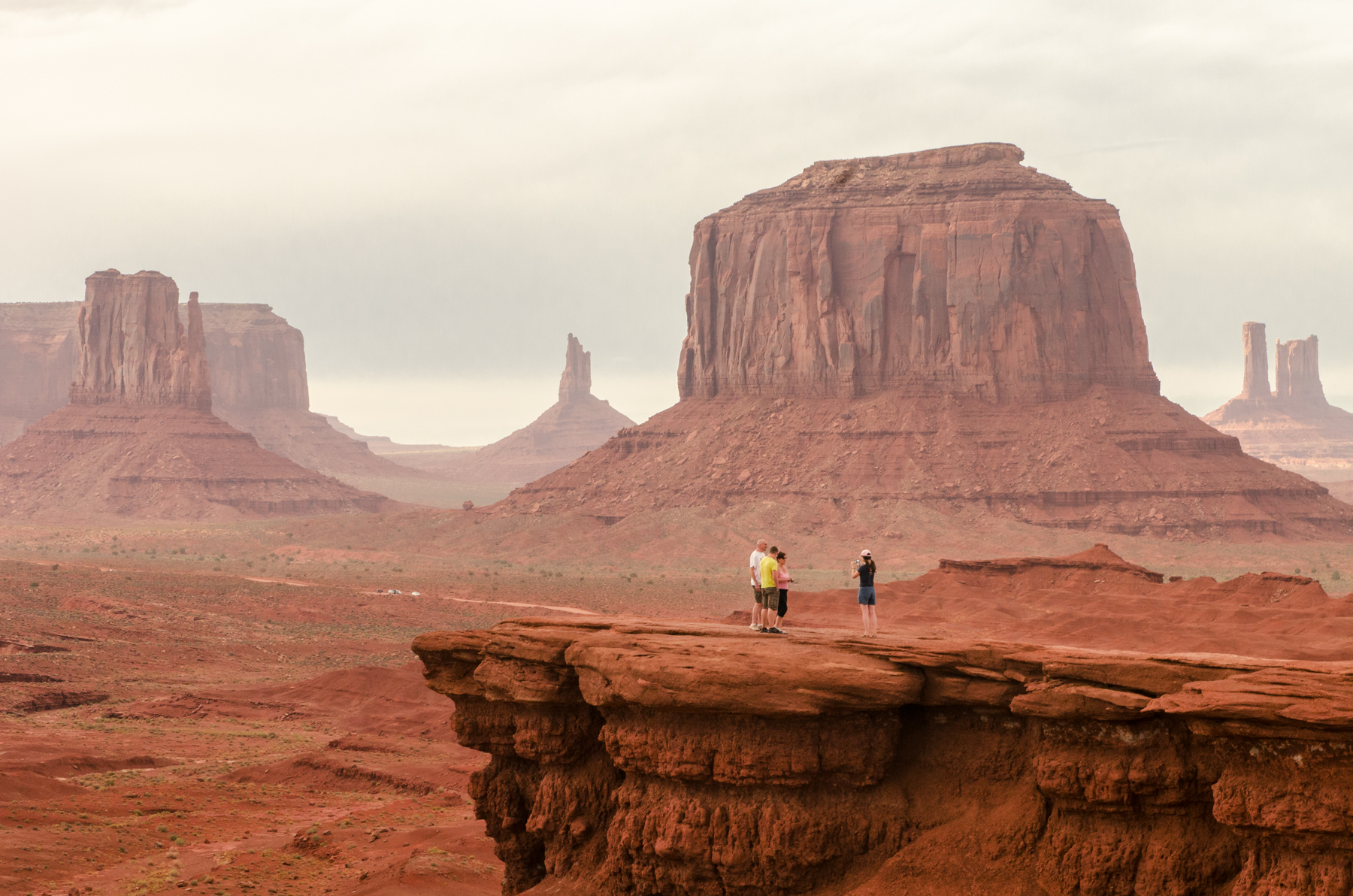 Monument Valley was spectacular, even in a dust storm so severe we could only see a few metres in front of us. 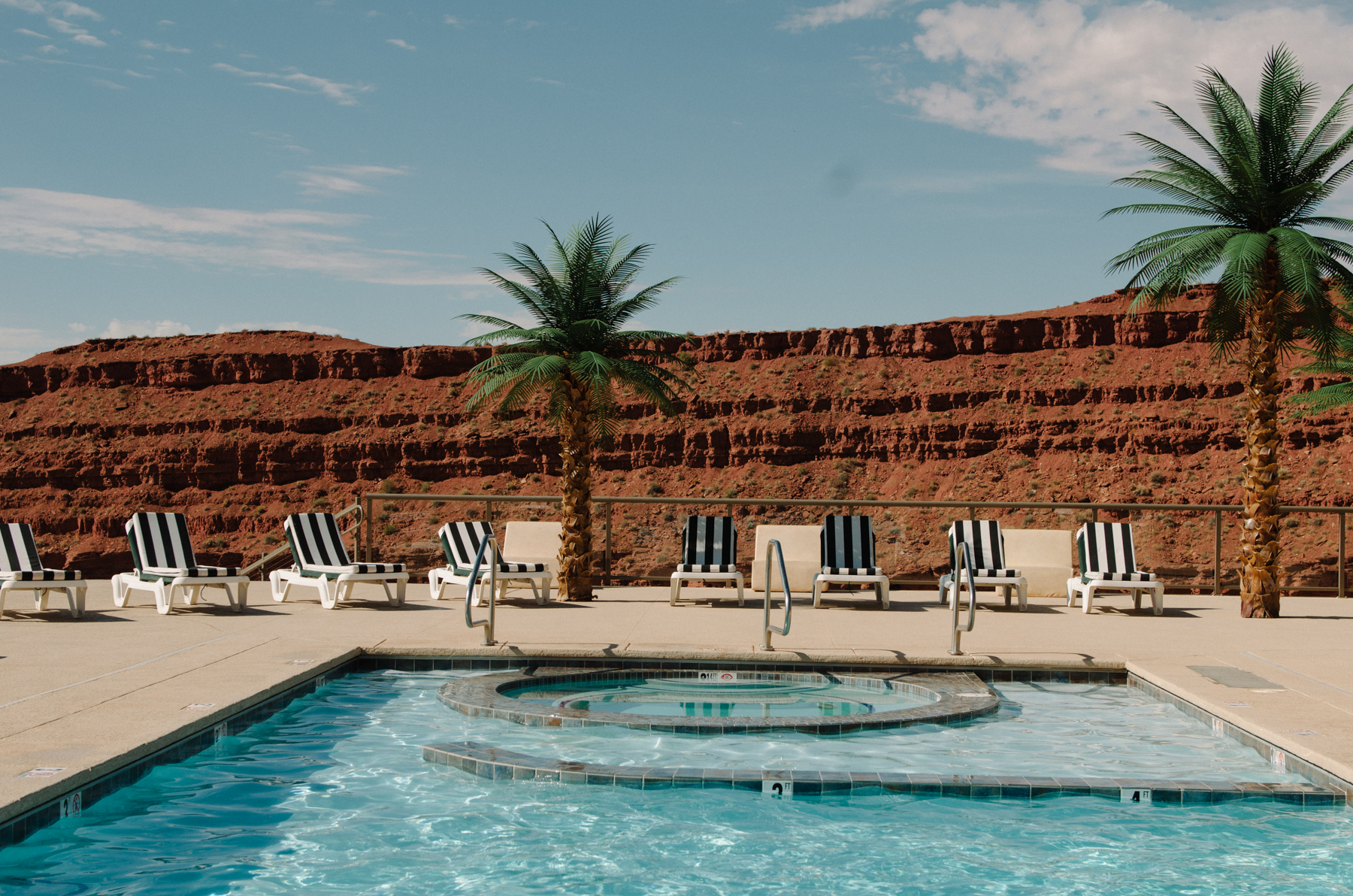 Hat Rock Inn, in the tiny desert hamlet of Mexican Hat in Utah, was the best motel of the trip. The fake palm trees sealed the deal. 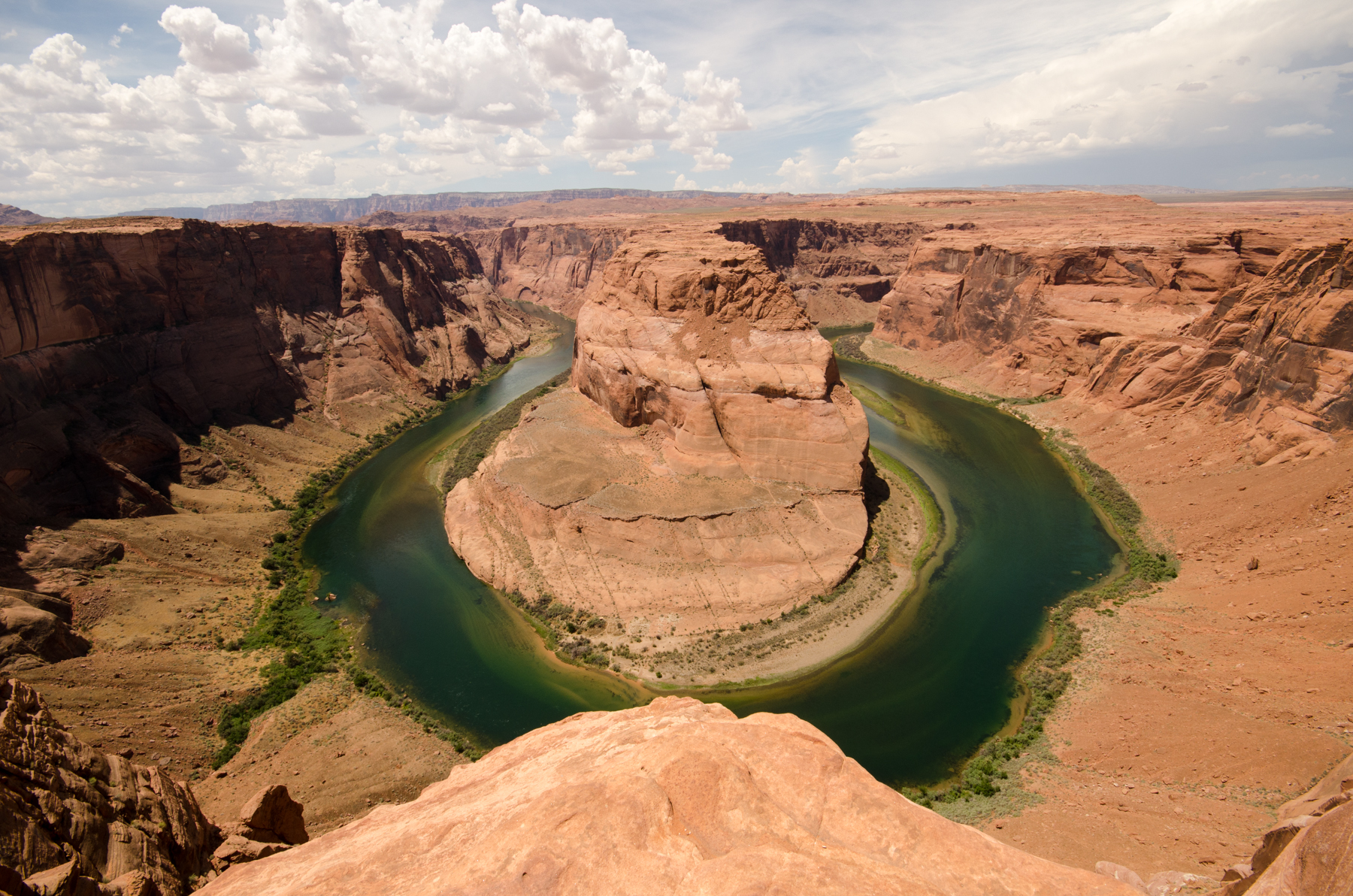 Horseshoe Bend in Arizona: no fences and just a sheer drop into the Colorado River. Frightening to watch people take photos of their toddlers standing right on the edge. 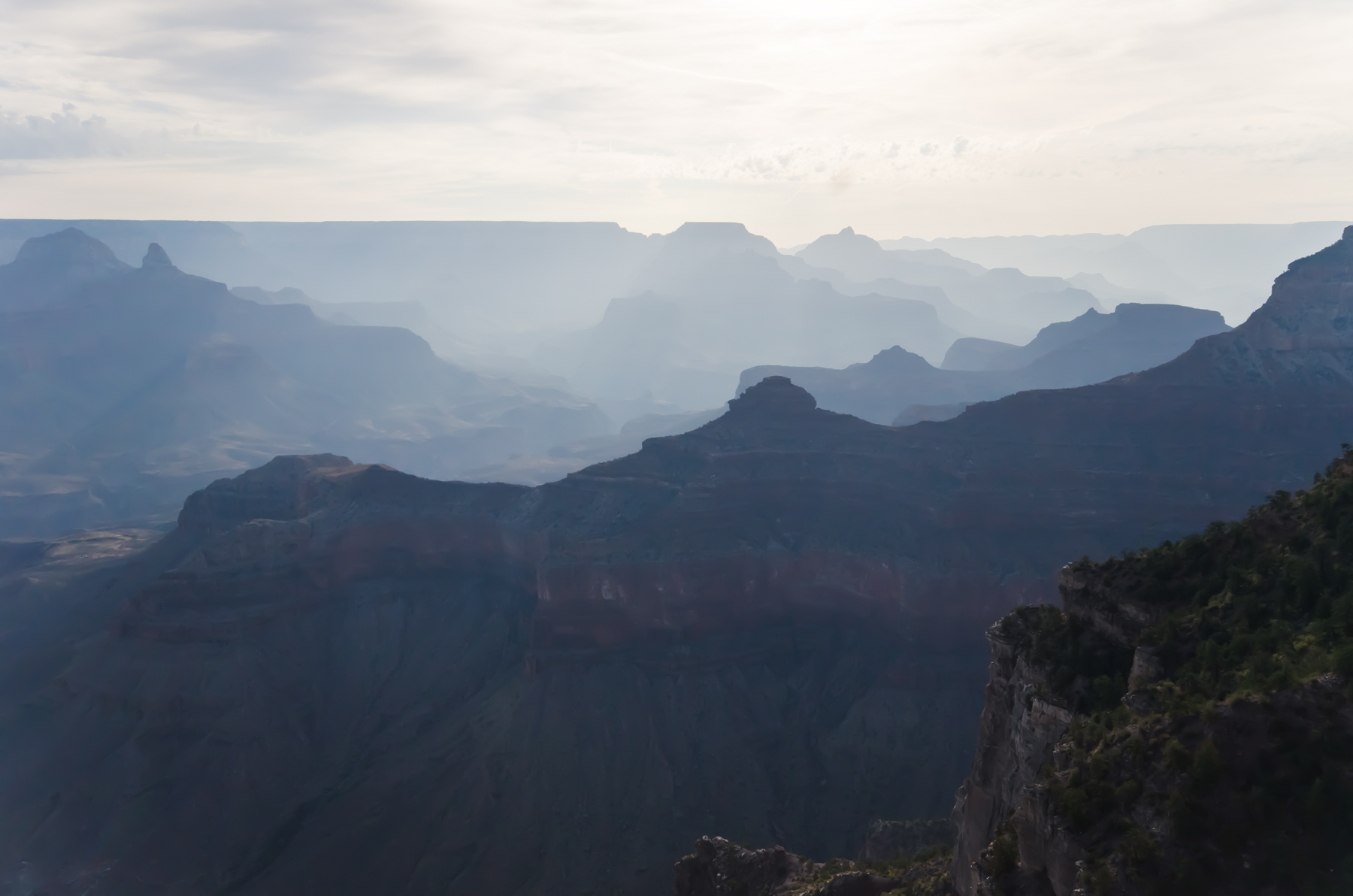 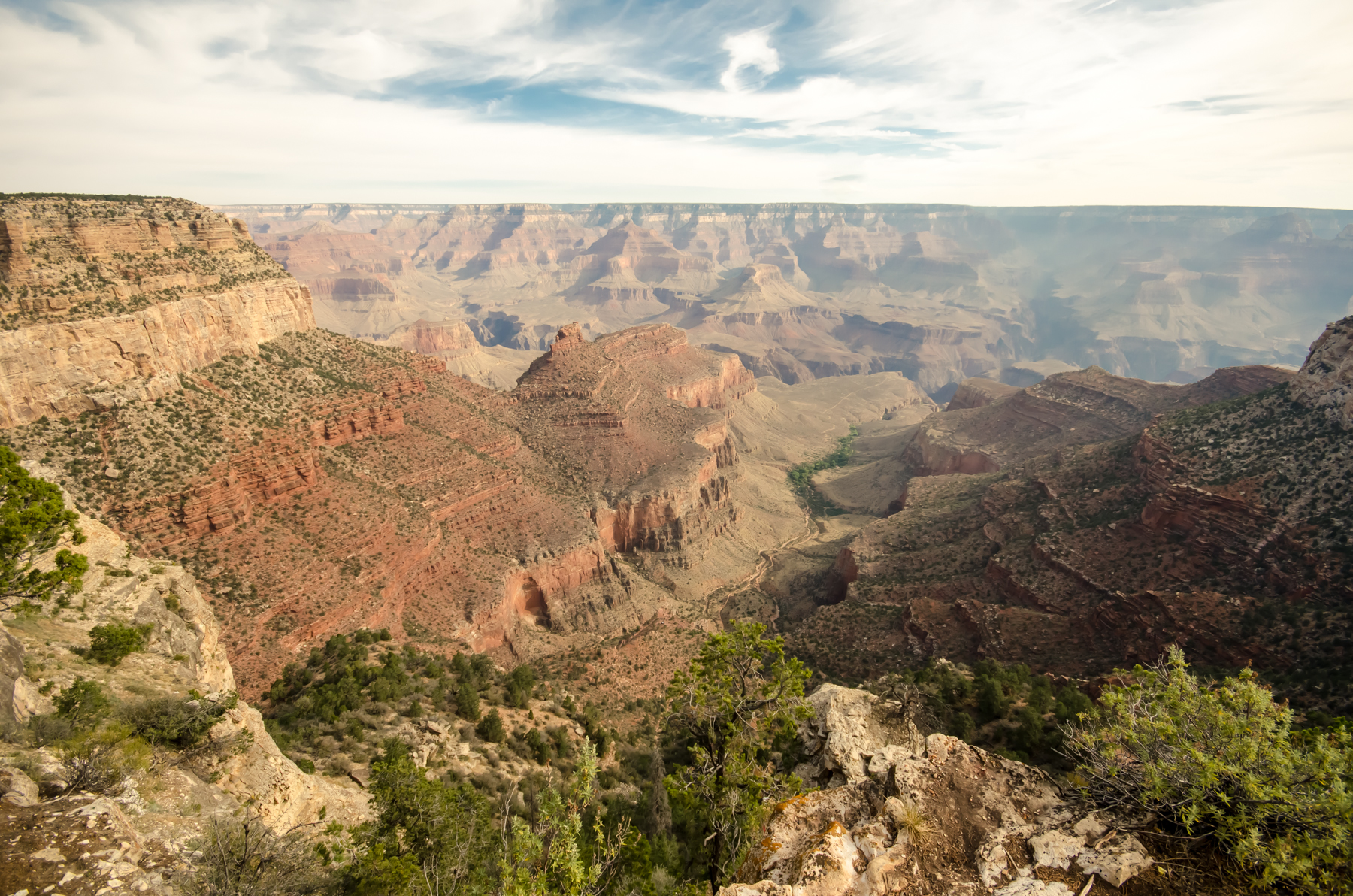 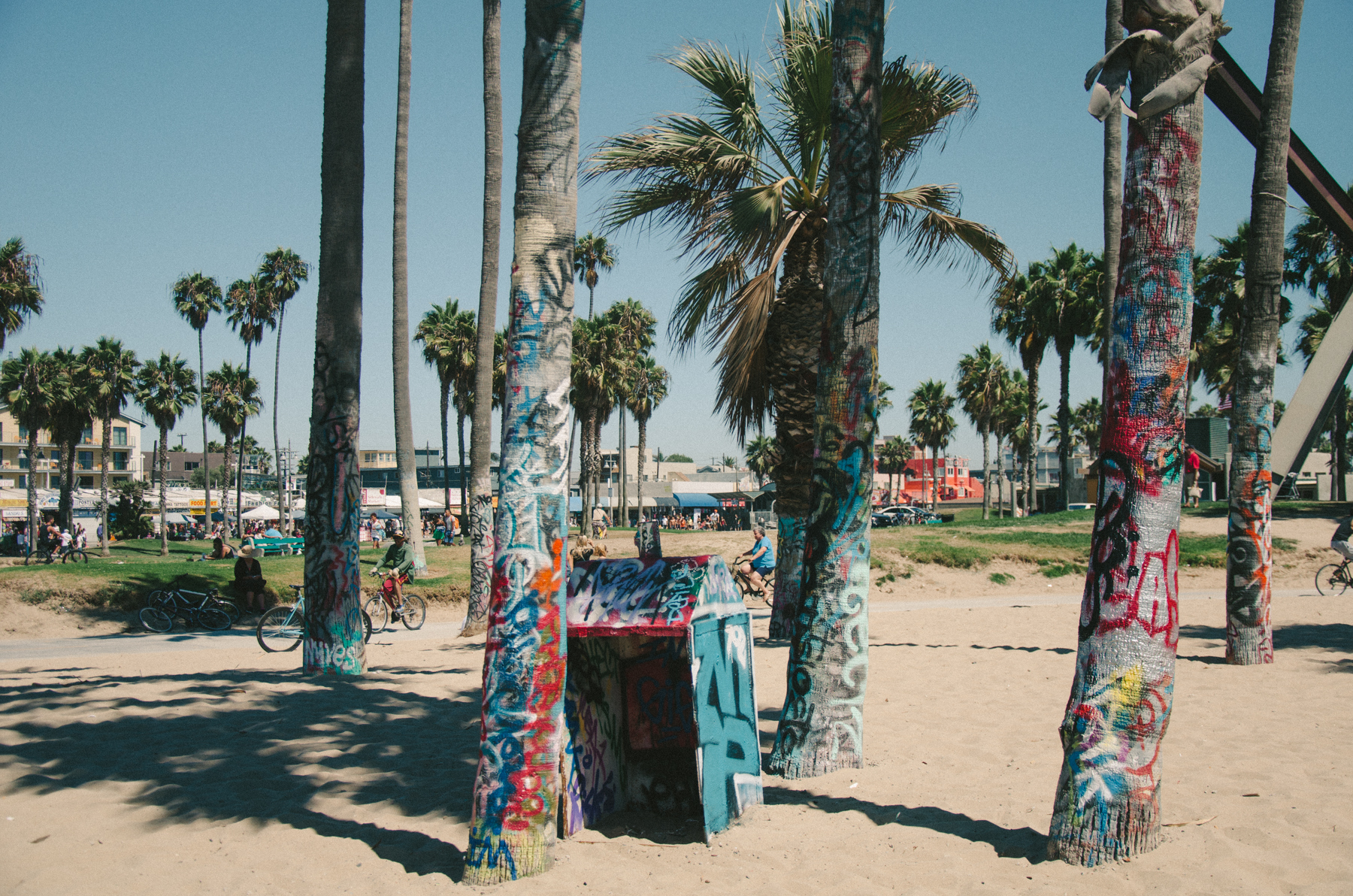 In Los Angeles, even the palm trees are covered in graffiti. 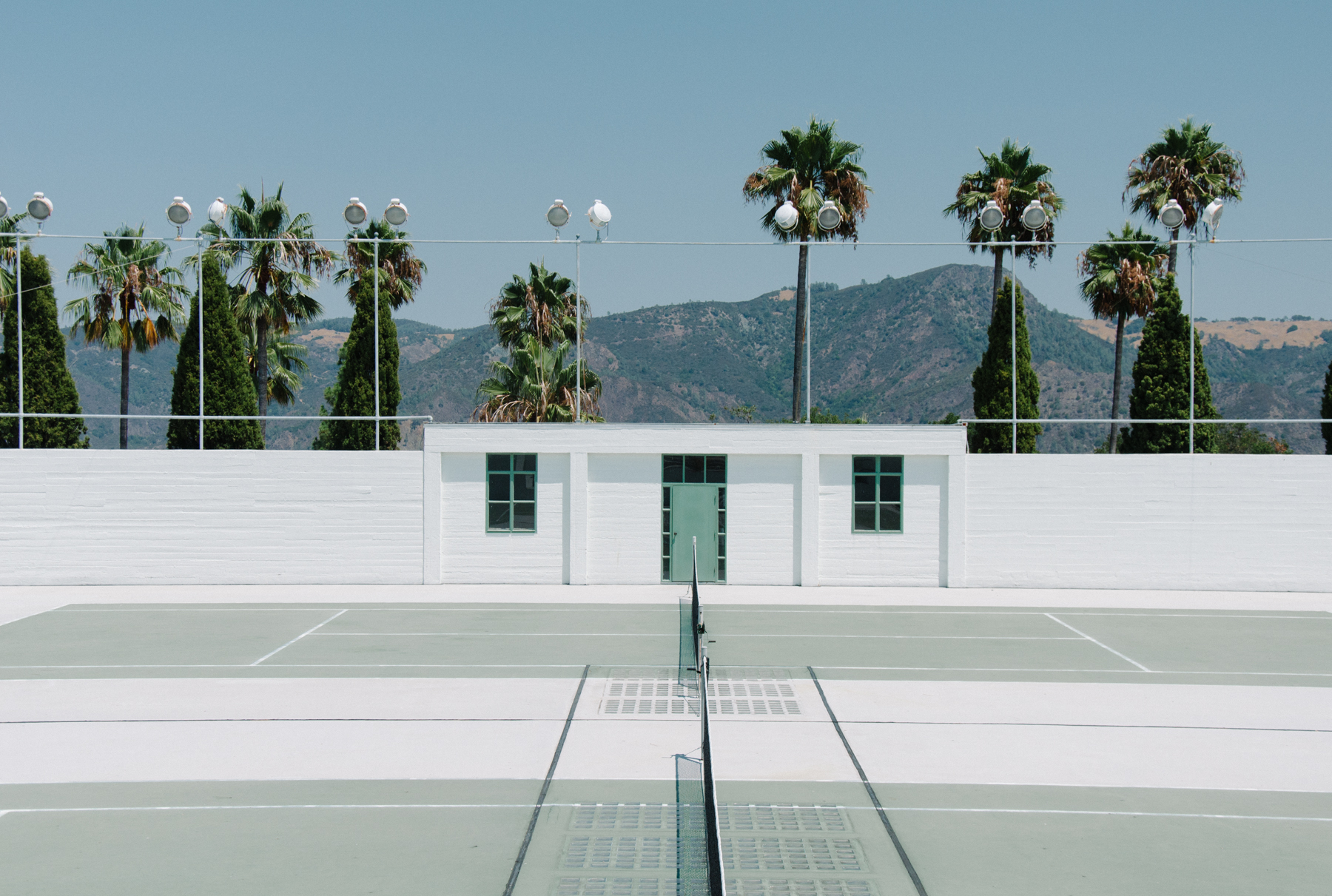 The tennis court is the only minimalist thing at the architectural craziness that is Hearst Castle. 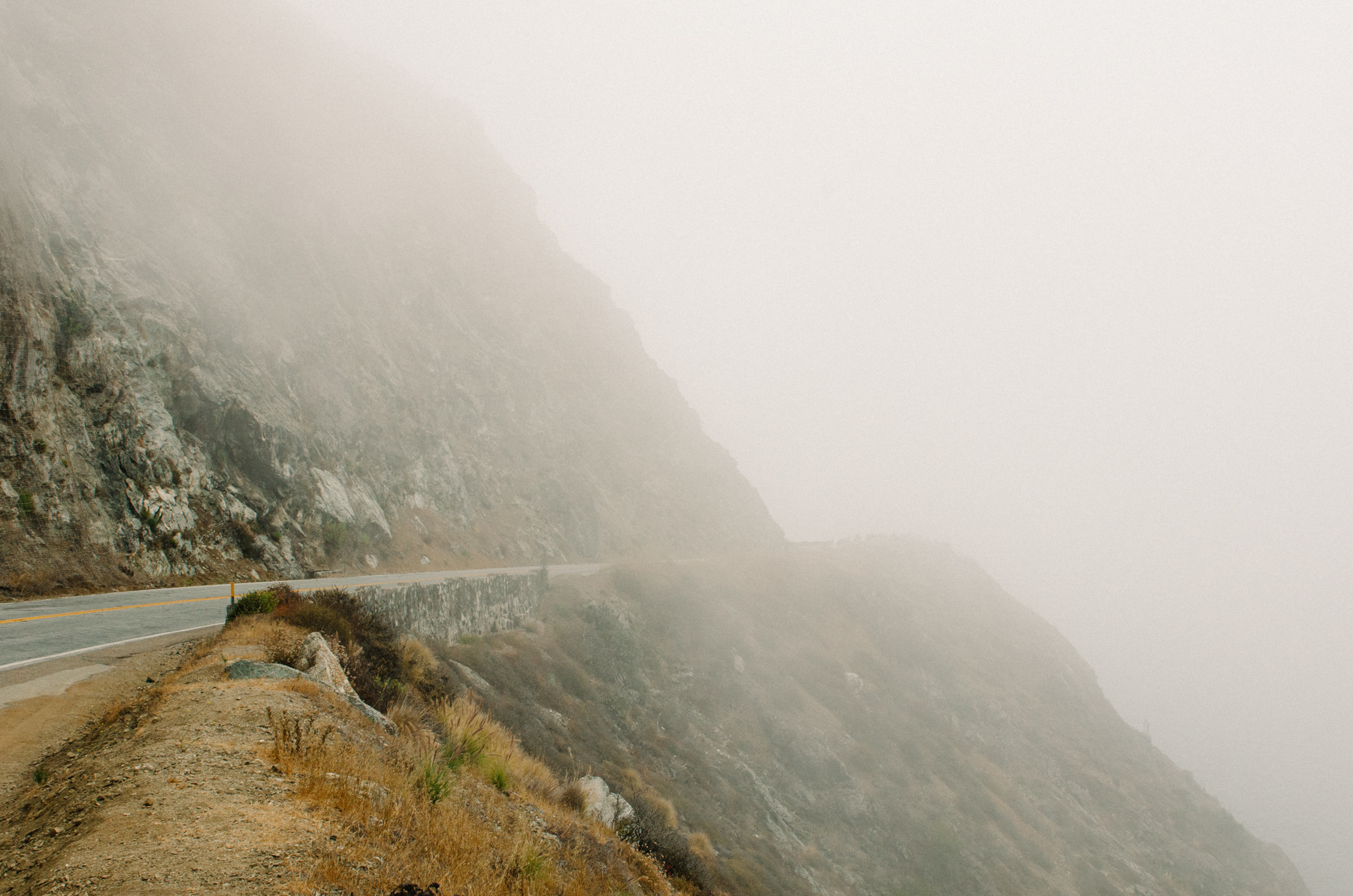 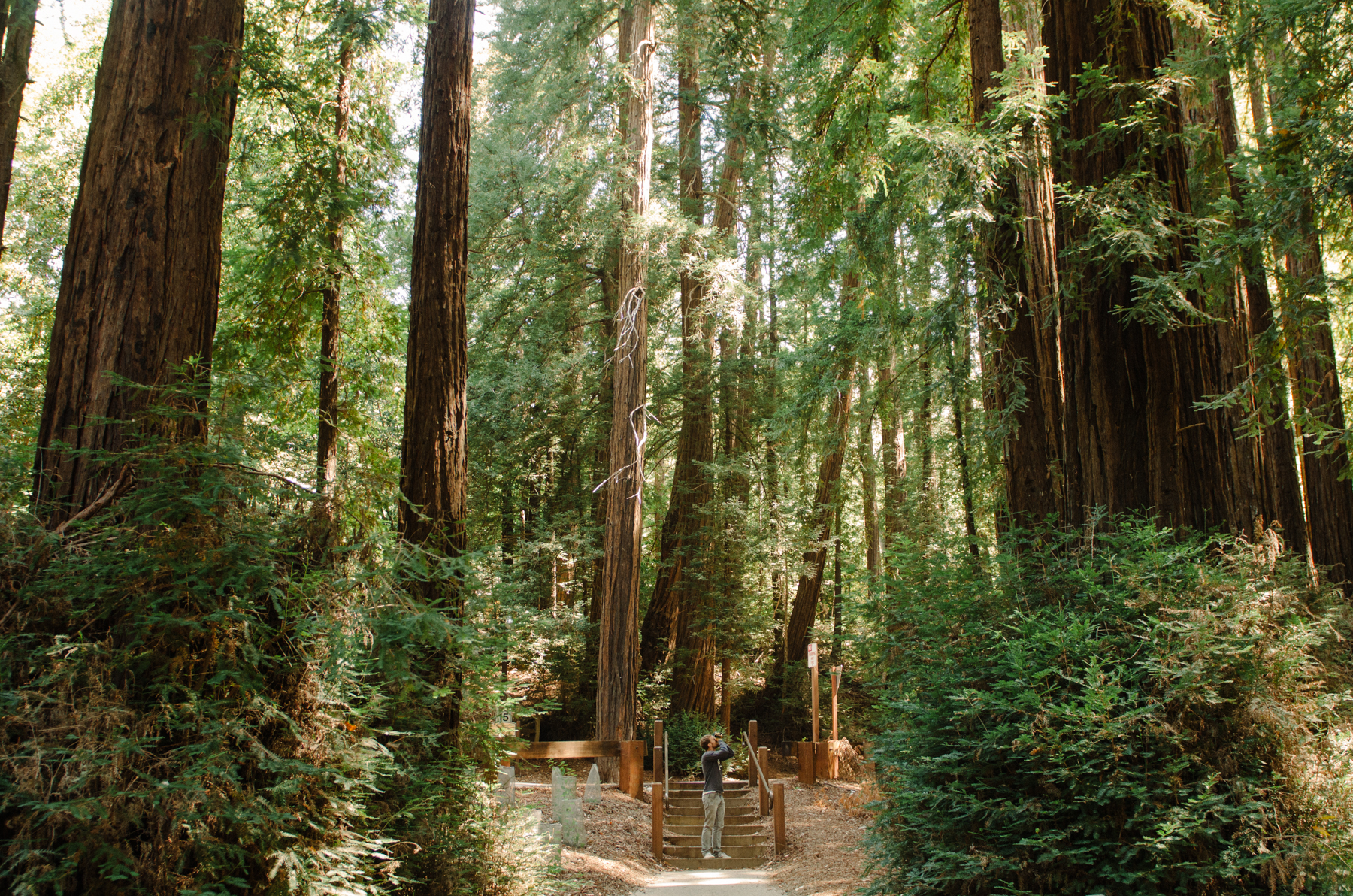 Hanging out with the redwoods in Pfeiffer Big Sur State Park. 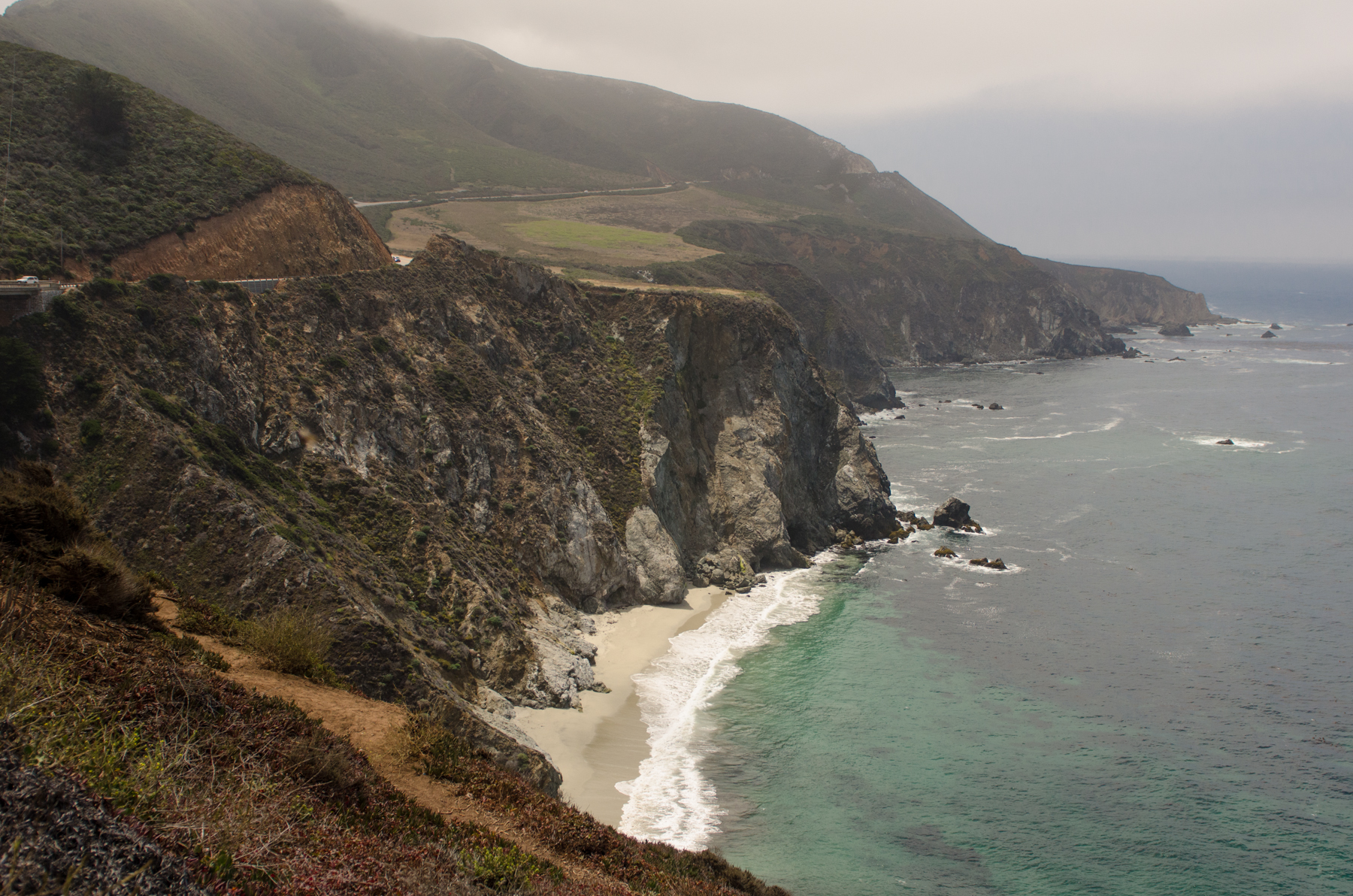 Big Sur when the sun came out.